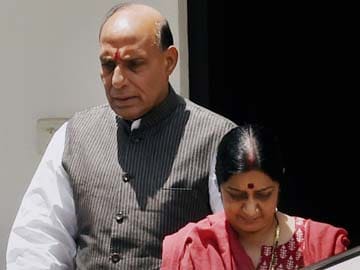 BJP President Rajnath Singh with party leader Sushma Swaraj after a meeting at her residence in New Delhi on Wednesday.

New Delhi: With exit polls predicting a victory for the BJP and its allies, the party's top leaders are in a series of meetings to ensure that fissures within are smoothened over. That exercise has included consultations with veteran leader LK Advani and Sushma Swaraj, neither of whom is a member of the core group working with the party's prime ministerial candidate, Narendra Modi.

While Mr Advani had originally opposed the party's decision to declare Mr Modi its prime ministerial candidate, Ms Swaraj has publicly taken on the BJP over its decision to  affiliate ahead of the election with some politicians accused of corruption.(Controversial politician named BJP candidate despite Sushma Swaraj's opposition)

A trio of BJP heavy-hitters - Nitin Gadkari, Arun Jaitley and party chief Rajnath Singh - are in Gujarat to meet him. Sources said Mr Modi will deliberate on a possible role for Mr Advani.

An "appropriate decision at an appropriate time" will be taken by the BJP on Mr Advani's role, said Mr Gadkari.  "Atal (Bihari Vajpayee) and Advani are our founder members, our most senior leaders."

Mr Advani, 86, is currently the Acting Chairman of the National Democratic Alliance or NDA, the political conglomerate of the BJP and its allies.  Sources say Mr Modi wants to head the alliance as a pre-emptive strike against a situation where there could be dual centres of power.

Promoted
Listen to the latest songs, only on JioSaavn.com
After initially opposing the ascension of Mr Modi to the lead role in the BJP campaign,  Mr Advani later endorsed him publicly and Mr Modi has made it a point to visit him on important occasions to signal respect for his seniority. (BJP's show of unity: Accompanied by Narendra Modi, LK Advani files his nomination)

Mr Gadkari and Mr Singh met with Ms Swaraj this morning as the party tries to define her role in a government led by Mr Modi.  Ms Swaraj, seen as close to Mr Advani, is running for parliament from Vidisha in Madhya Pradesh, and has kept a low-profile in the BJP's national campaign.