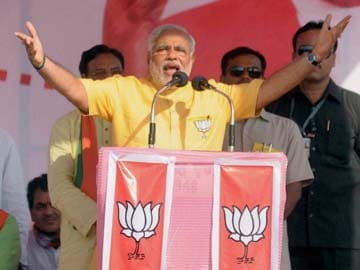 Bankura: Narendra Modi today said Bangladeshi infiltrators who were allowed into the country for votebank politics would have to go back, while refugees who have been thrown out of Bangladesh on religious grounds would be greeted with open arms.

"BJP's position is very clear, votebank politics has destroyed the country... Those who are Bangladeshi infiltrators, will have to go back," Mr Modi said.

"Two types of people have come from Bangladesh - the refugees who have been thrown out in the name of religion and the infiltrators," he said at an election rally.

"In any country of the world if there are Indians in whose blood the colour of India runs, if they are ethnic Indians, whatever be the colour of their passport. Should not they come to India and be greeted with open arms?

Hitting out at Trinamool Congress chief Mamata Banerjee for her "paper tiger" jibe against him, the BJP prime minister hopeful said, "Didi is talking so much about tigers, but she is in the service of infiltrators."

"Had she done (something) for the tigers of Sundarbans instead of doing so much for the infiltrators, then tourists from all over the world would have flocked Bengal," he said.

Alleging that neither the Left, Congress or TMC were concerned whether the youths of the country get jobs, he said "they, however, ensure that the Bangladeshi infiltrators get jobs so that their votes are cast in their favour."

Promoted
Listen to the latest songs, only on JioSaavn.com
"Our first responsibility is to give opportunities for income to our countrymen and not to infiltrators," Mr Modi said.

At an election rally in Srirampur last week, Mr Modi had said that Bangladeshis would be pushed out with their bags and baggages after election results on May 16.