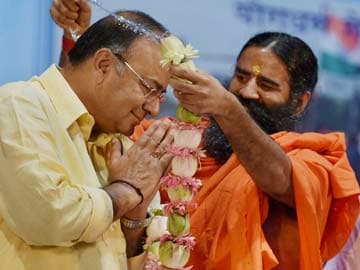 BJP leader Arun Jaitley and Ramdev at the 'Sankalppurti' Mahotsav

At an event organized by Ramdev's supporters on Sunday, Mr Jaitley said, "The role played by Ramdev in awakening the voters is similar to the struggles of Mahatma Gandhi and Jayprakash Narayan. He had no greed for any post... His motto is to strengthen the system. Ramdev's campaign against black money and corruption is similar to those of Mahatma Gandhi and Jayprakash Narayan."

Ramdev, who openly endorsed the BJP and its prime ministerial candidate Narendra Modi, had vowed not to return to his main ashram in Haridwar till the Congress-led UPA government was defeated. (Baba Ramdev joins 'Narendra Modi for PM' chorus)

The BJP won a massive victory in the national election, decimating the incumbent Congress and getting 282 seats, enough to form a government on its own. With its allies, the party won 336 seats. (Narendra Modi Wins India. BJP and Allies Cross 300 Seats)

Promoted
Listen to the latest songs, only on JioSaavn.com
At this function organized to celebrate the BJP's win, several newly elected party MPs were also present, along with BJP chief Rajnath Singh.

"I thank you for your contribution. You have not worked for the party, but for the country," Mr Singh told the yoga teacher, whose followers had campaigned for BJP candidates across the country.