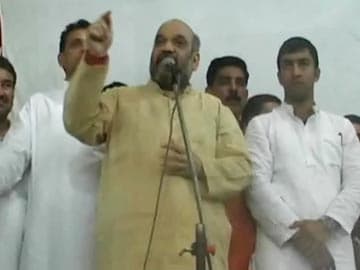 Bijnor: Amit Shah, a close aide of BJP's prime ministerial candidate Narendra Modi, has landed in a major controversy for saying that the upcoming general election was an opportunity to seek "revenge for the insult" inflicted during the riots in Muzaffarnagar in Uttar Pradesh last year.

Over 60 people were killed and nearly 40,000 were displaced in the communal violence that ripped through several areas of western UP in September.

"The elections in Uttar Pradesh, especially in western Uttar Pradesh, is an election for honour, for seeking revenge for the insult, and for teaching a lesson to those who committed injustice," Mr Shah told a gathering of Jats on Thursday in Shamli, one of the worst-affected areas in the riots. Interestingly, the 50-year-old was flanked by BJP legislator Suresh Rana, who is one of those accused of inciting tension between Jats and Muslims during the riots.

The Congress, which has been accused by the BJP of "blatant communalism" and "polarizing" voters after it received the controversial backing of a top Muslim religious leader on Friday, promptly hit back. (After controversial Sonia meeting, Congress scores Shahi Imam's support)

"The language used by Amit Shah in a communally-sensitive area like Muzaffarnagar to incite people, can't they see communalism in it," said Congress leader Satyavrat Chaturvedi.

The party has approached the Election Commission, seeking a criminal case against Mr Shah and a ban on his campaigning for the polls.

Promoted
Listen to the latest songs, only on JioSaavn.com
The BJP, though, dismissed the allegations. "UP government has insulted the people there. It is not a question of Hindus and Muslims... Instead of putting balm on the wounds of the victims, they sprinkled salt. Revenge should be taken for this insult," said BJP spokesperson Mukhtar Abbas Naqvi.

Mr Shah faces charges of murder in connection with a fake encounter case while he was a minister in Mr Modi's Gujarat. But his proven talent in winning elections saw the BJP entrusting him with handling the campaign in Uttar Pradesh, from where Mr Modi will fight his first parliamentary election.