AIADMK upbeat ahead of counting in Tamil Nadu 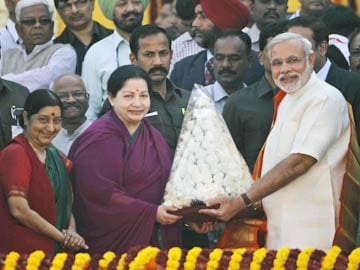 Jayalalithaa presents flowers to Narendra Modi during the swearing in ceremony of Modi as the chief minister of Gujarat state in December 2012.

Chennai/Puducherry: The poll prospects of 845 contestants, including 2G scam accused A Raja and Dayanidhi Maran, Congress' Manishankar Aiyar and Finance Minister P Chidambaram's son Karti, will be known tomorrow when votes polled for 39 Lok Sabha seats in Tamil Nadu are taken up for counting.

Electoral authorities have set up 42 counting centres across the state for counting of votes cast by 73.67 per cent of the 5.50 crore electorate who exercised their franchise on April 24.

Votes polled for Alandur Assembly segment, which went for bypoll along with Lok Sabha elections, will also be taken up simultaneously where 14 candidates are testing their electoral luck.

Tamil Nadu Chief Electoral Officer Praveen Kumar told PTI here that about 12,000 officials would be involved in the counting duty, a process for which more than 20,000 security personnel will provide a three-layer security cover.

Mr Chidambaram, who opted out of contest, is hoping that his son Karti will succeed in holding the fort for him in his bastion Sivaganga in his debut entry.

Leaders and cadres of the ruling AIADMK are on cloud nine in the wake of exit polls giving it an edge and even some predicting a sweep for the Chief Minister Jayalalithaa-led party to realise her national ambitions.

Probably sensing the people's mood, Ms Jayalalithaa had dumped the CPI-M and CPI, erstwhile AIADMK's allies, and took the plunge into the poll battle on her own eyeing to win more number of seats.

The M Karunanidhi-headed DMK, which has debunked exit poll results, hopes to achieve a turnaround in its electoral fortunes ahead of assembly polls which are just two years away.

BJP, which successfully sewed up a six party grand alliance for the first time in this Southern state, is hoping to win some seats by taking advantage of the Modi factor.

Congress, which fought in all 39 constituencies bereft of allies, seems to be facing grim prospects in this election, which might even hark back to the party's rout in 1998.

The party lost its long-time ally DMK last year when the Dravidian party walked out of the Congress-led alliance over the emotive Sri Lankan Tamils issue.

Promoted
Listen to the latest songs, only on JioSaavn.com
In the neighbouring Union Territory of Puducherry, Minister of state in PMO V Narayanasamy is trying his luck for a second term where 29 other aspirants have also faced 8.85 lakh voters on April 24 for the lone Lok Sabha seat.

The elections will help ruling AINRC, which captured power in 2011 just two months after its launch by Chief Minister N Rangasamy, assess its government's popularity after three years in power.