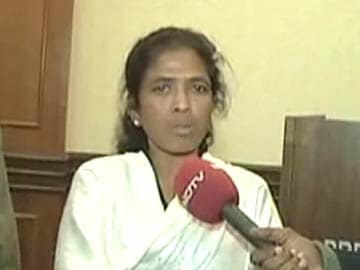 Soni Sori has been accused by Chhattisgarh government of helping the Naxals. (File photo)

New Delhi: Among the 21 names declared by the Aam Aadmi Party on Sunday as its nominees for the Lok Sabha elections is tribal rights activist and school teacher Soni Sori, who has been accused by the Chhattisgarh government of helping the Naxals.

Ms Sori was a last-minute addition to the list released by the Arvind Kejriwal-led party in the run-up to national elections, due by May. The activist has been fielded from tribal-dominated Bastar seat against incumbent MP Dinesh Kashyap of the BJP.

"We asked her if she wanted to fight elections and she expressed her willingness. Charges against her are bogus. She has been targeted because she works for tribal rights," senior AAP leader Prashant Bhushan said.

The 36-year-old activist was granted permanent bail by the Supreme Court last week and allowed to visit Chhattisgarh, more than two years after she was arrested and put in a Raipur jail in October 2011 after being arrested for allegedly receiving money from Essar Group on behalf of the Naxals.

Ms Sori had alleged that she was raped at the Dantewada police station after her arrest. The Chhattisgarh police had denied the allegations, claiming she fell in a bathroom.

Promoted
Listen to the latest songs, only on JioSaavn.com
A police gallantry award to Chhattisgarh police officer Ankit Garg on the Republic Day in 2012 for anti-Naxal operations was widely slammed by human rights activists. Ms Sori had alleged that she was stripped, tortured and given electric shocks in Mr Garg's presence.

The Supreme Court came to the rescue of Ms Sori and her 26-year-old nephew Lingaram Kodopi in November last year. That she was brutally sexually tortured was confirmed by independent medical examinations conducted under the Supreme Court's direction.