NIOS To Declare Results For October Exam (Class 10, 12) This Week

NIOS Class 10 and Class 12 result will be released on the official website, at nios.ac.in.

NIOS class 10, 12 result would be announced on December 12. An official from the National Institute of Open Schooling (NIOS) confirmed it to NDTV that the NIOS results for the October secondary and higher secondary exams will be released tomorrow. A direct link to download the NIOS results is available online.

NIOS is an autonomous institution under Ministry of Human Resources Development, Government of India, which conducts open secondary and higher secondary ceritificate examinations.

"Candidates are informed that the results for October exams have not been released yet. The results are expected to be released on December 12," the official told NDTV.

The NIOS results will be released online after 11.00 am on Thursday, the official said.

According to the NIOS authorities, it is the largest open schooling system in the world.

The NIOS conducts Class 10 and 12 exams twice a year in April-May and in October-November. 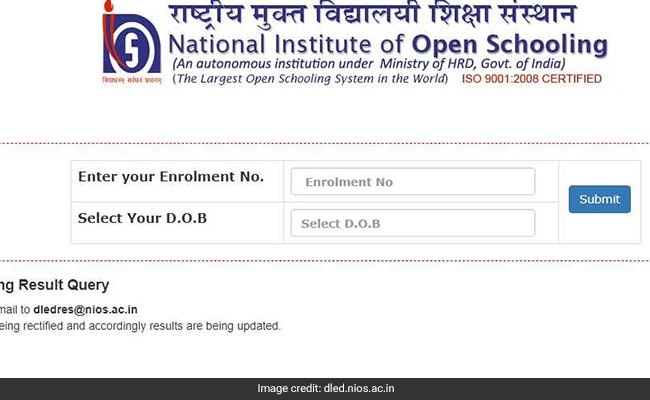 NIOS result 2019:  A direct link to download the NIOS results will be available at results.nios.ac.in.

This year the result for NIOS Class 10 was released 2 days after Class 12 result was released for the April-May exam.

The same pattern could be followed while releasing October-November exam result too.

Meanwhile, a direct link to access the NIOS October results have been activated on the official website of the Institute.

(Candidates who had appeared for the NIOS Class 10 and Class 12 exams may download their results as and when the Institute releases the results after entering their examination credencials).