National Science Day: Origami Paper Microscopes To Be Given To Rural Schools By Bengali Science Portal 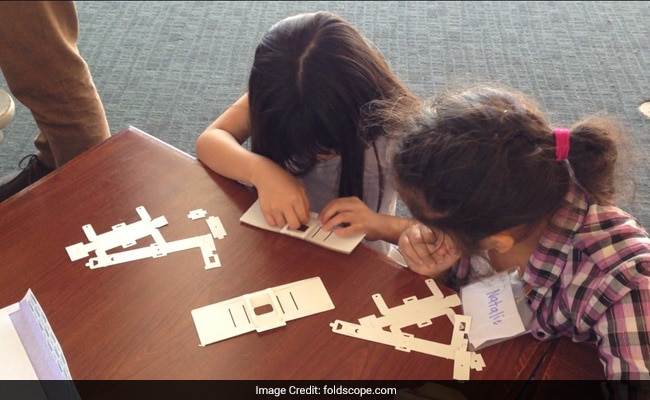 National Science Day: Origami Paper Microscopes To Be Given To Rural Schools By Bengali Science Portal

Kolkata: Inspired to make science accessible to Bengali-speaking masses, creators of a popular science web portal plan to distribute Foldscopes -- a $1 origami paper microscope -- to schools in rural areas of West Bengal, free of cost. Kazi Rajibul Islam, Anirban Gangopadhyay, Dibyajyoti Ghosh and Kunal Chakraborty from West Bengal -- all researchers-cum-co-founders of Bigyan.org.in which completes three years on National Science Day (on Tuesday) -- have taken it upon themselves to dispel fear of science and intimidation among students in the state by churning out peer-reviewed articles on every sphere of science.

"We did not just publish an article on the innovation of Foldscope. We contacted the inventors (researcher Manu Prakash from Stanford University) who sent us about two dozens of those microscopes that we distributed to various schools in West Bengal and Bangladesh. We also translated the assembly instructions of the Foldscope for its official website," Islam, a faculty at University of Waterloo, Canada, told IANS via mail.

Now the team is ready to disseminate its second lot of Foldscopes.

"We have recently acquired our second lot from Manu Prakash and this will be distributed among school teachers on priority basis and at free of cost," added Islam.

Spread across labs in the US, Canada and India, the brains behind the not-for-profit web initiative, feel it is necessary to apprise high school students of cutting-edge science across the world, in their mother tongue, to boost excitement and further their love for the subject.

"We got a researcher involved in the LIGO project (Laser Interferometer Gravitational Waves Observatory) to write on gravitational waves detection," said Islam.

One of their most popular endeavour is the digital archiving programme under which classical articles by renowned scientists such as entomologist Gopal Chandra Bhattacharya and Jagadish Chandra Bose have been made available to the layman.

"We have introduced mobile phone screen friendly e-pub magazine and will also bring out audiobooks and podcasts of our articles soon," he added.


(Except for the headline, this story has not been edited by NDTV staff and is published from a syndicated feed.)
Comments
National Science DayOrigami Paper MicroscopesFoldscopes