The united front of Left student groups AISA, SFI, AISF and DSF won all the four central panel posts in the JNUSU polls, results of which were announced on Tuesday. 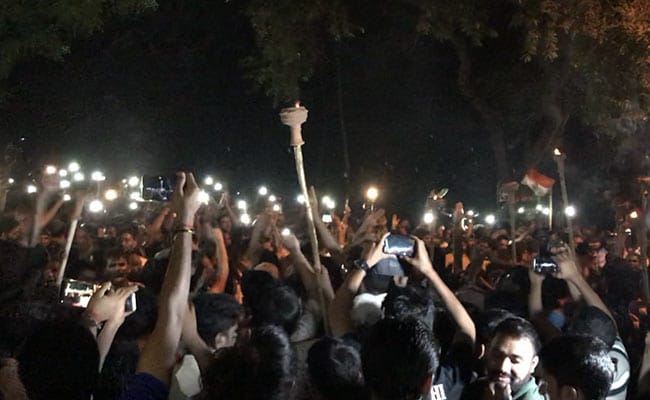 Getting better facilities and more hostels for students, and thwarting any attempt to silence democratic bodies are on the agenda of the newly-elected JNU Students' Union (JNUSU). The united front of Left student groups AISA, SFI, AISF and DSF won all the four central panel posts in the JNUSU polls, results of which were announced on Tuesday. The grouping had swept the election last year too and its main rival for the polls is the Akhil Bharatiya Vidyarthi Parishad (ABVP).

Newly-elected president Aishe Ghosh said one of the major issues on the agenda is more hostels for students. "We will also work to have a barrier free and differently-able friendly campus," Ghosh, who hails from Durgapur in West Bengal and is a member of the SFI, said.

She contested against the ABVP's Manish Jangid and bagged 2,313 votes. DSF's Saket Moon, who was elected vice president, said the agenda is going to be two-fold -- raising campus issues and thwarting any attempt to silence democratic bodies.

There have been budget cuts, which have led to a slash in library funds, poor ambience in hostels, lack of facilities in classrooms and poor condition of labs that are functioning with old instruments, he claimed.

"The administration is trying to scuttle voices and trying to silence democratic bodies like the academic council.

"They did away with the gender sensitisation committee against sexual harassment (GSCASH) and brought in an internal complaints committee which punishes complainants," Moon said.

They have "criminalised" the process of registering a complaint," he alleged.

There is a crisis of hostels at the Jawaharlal Nehru University (JNU) and this union will work to address it, Moon asserted.

The JNUSU will stand in solidarity with students, farmers and teachers whenever they raise their voices against "fascist forces", said Moon, who is in second year of his Ph.D in the School of Social Sciences.

He defeated ABVP's Shruti Agnihotri for the post of vice president.

AISA's Satish Chandra Yadav, who was elected as the general secretary said, "There are forces inside the campus that want to end democratic voices and silence dissent."

"There is a need to save the students'' union from such forces and we will fight against them," he said.

This time, the opponent in the elections was not the ABVP but the administration, "which employed all tactics" to hamper the poll process, said Yadav, who is in his home town Maharajganj in Uttar Pradesh.

"The administration harassed the election committee members and sent them notices accusing them of violating guidelines," he said and wished he was on campus to celebrate the win.

Yadav is in his second year Ph.D at the School of Social Sciences and he defeated Sabareesh P A for the post.

Mohammad Danish, who was elected joint secretary, said they would fight against the fund cuts for the library.

The administration has effected 80 per cent fund cuts for the library which led to ending of subscription to many journals. More students have been admitted this year, owing to the increase in number of seats due to EWS reservation, but there are no facilities for them in libraries," he said.

Danish said the union would also fight for getting better facilities for engineering and management students.

"These students are paying a higher fee but are not getting facilities and even hostels. We will fight for fee parity for them," he added.

Danish is currently in his first year of Ph.D in the School of Languages and hails from Gaya in Bihar. He defeated Sumanta Kumar Sahu.

The results were announced after the Delhi High Court directed the election committee to do so. The court had restricted the varsity from notifying the results.

The voter turnout JNUSU election held on Friday was 67.9 per cent, believed to be the highest in seven years. Over 5,700 students cast their votes.

(Except for the headline, this story has not been edited by NDTV staff and is published from a syndicated feed.)
Comments
JNU resultJNUSU result