JNUSU election result has been declared.N Sai Balaji has been elected as the President, Sarika Chaudhary as the Vice President, Aejaz Ahmed Rather as the General Secretary and Amutha Jayadeep as the Joint Secretary. 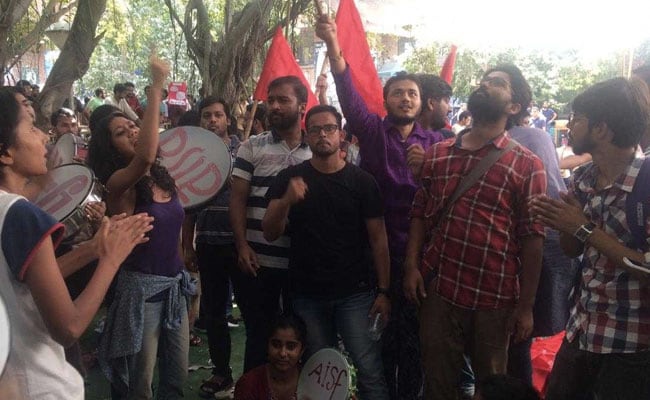 JNUSU election result is under way. After suspending the vote counting for close to 14 hours, the election  committee resumed it at around 6.30 pm yesterday. So far, the left unity is leading the top four posts in the panel after winning the councillor posts. The final result is expected anytime soon. While the University has been a left bastion traditionally, the BAPSA which has based its politics on 'Bahujan, Scheduled Caste and Minority assertion' has made inroads in JNU student politics for last few years.

September 16, 2.16 pm: N Sai Balaji has been elected as the President, Sarika Chaudhary as the Vice President, Aejaz Ahmed Rather as the General Secretary and Amutha Jayadeep as the Joint Secretary. ABVP candidates have come second in all the posts.

September 16, 12.25 pm: For the President post, new entrant RJD is the third runners up as per the latest update.

September 16, 11.20 am: In the other central panel posts of vice-president, general secretary and joint secretary, the United Left is ahead of its rivals.

September 16, 11.15 am: According to the election committee, after counting 3,281 out of 5185 votes, N Sai Balaji, presidential candidate of the Left is leading with 1,350 votes. Akhil Bharatiya Vidyarthi Parishad (ABVP) candidate Lalit Pandey was at the second position with 605 votes followed by Thallapalli Praveen from BAPSA (Birsa Ambedkar Phule Students Association), reported PTI.

September 16, 11.10 am: Close to 65% vote counting over. Left alliance gallops ahead than other contenders.

September 15, 10.46 pm: "We were attacked by three people who came in a car wearing masks while we were coming back from Vasant Kunj police station after lodging complaints against ABVP," claim student leaders. Tension prevails in the counting area.

September 15, 10.07 pm: In the first 50 counting, ABVP leads in three of the top posts in all Science schools.

September 15, 7.25 pm: Counting for councillors in School of International Studies is going on.

September 15, 6.49 pm: ABVP representatives not allowed for counting. Instead a teacher observer, approved by the election committee, will be present.

September 15, 6.11 pm: JNUSU poll counting resumes, after being suspended for more than 12 hours.

September 15, 6.07 pm: The deadlock at the JNU persisted even after 12 hours, with the the ABVP which is the student wing of the Rashtriya Swayamsevak Sangh (RSS), accusing the election authorities of bias towards the Left outfits and threatening to move court, reported PTI.

September 15, 4.02 pm: 12 hours since it has been suspended, there's no official update on JNUSU poll counting.

September 15, 2.30 pm: As of now there is no further official update regarding the JNUSU election vote counting. 'Counting of votes for the Jawaharlal Nehru University Students' Union (JNUSU) polls were stopped on Saturday when two principal contenders of an unnamed political group along with their supporters barged into a counting centre and tried to snatch ballot boxes,' the varsity election committee said to IANS.

September 15, 12.45 pm: Left leaning and independent candidates have won the councillor posts in School of Life Sciences and School of Computer and System Sciences, respectively.

September 15, 12.25 pm: "From 2012, the elections are being conducted as per the Lyngdoh Committee recommendations. In the last six years, I have not seen this high voting percentage," an official said to PTI.

September 15, 11.50 am: High voting percentage has been recorded in Sciences and School of Languages.

September 15, 11.45 am: As per an official statement from the election committee, the election process has been suspended as few students barged into the counting venue and tried to snatch the sealed ballot boxes and ballot papers.

September 15, 11.32 am: This is the first time, Lalu Prasad Yadav's RJD party has participated in the JNUSU elections.