The voter turnout in the keenly contested JNUSU election on Friday was 67.8 per cent, believed to be the highest in six years. Over 5,000 students cast their votes. 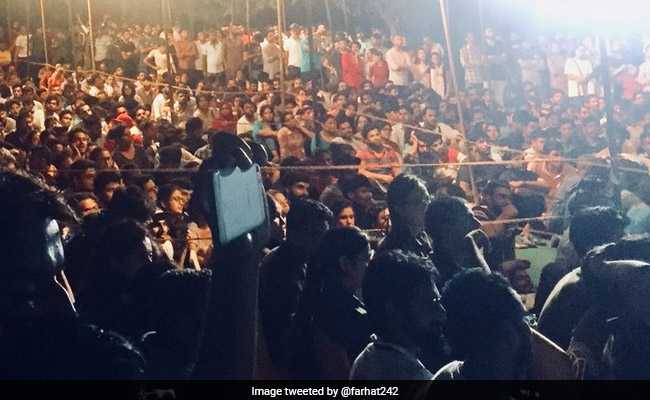 Counting of votes for the JNU students union (JNUSU) polls was suspended Saturday by election authorities citing "forcible entry" and "attempts to snatch away ballot boxes" at a counting venue, after the ABVP staged protests claiming it was not informed about the start of the process.

The deadlock at the Jawaharlal Nehru University persisted even after 12 hours, with the the Akhil Bharatiya Vidyarthi Parishad (ABVP) which is the student wing of the Rashtriya Swayamsevak Sangh (RSS), accusing the election authorities of bias towards the Left outfits and threatening to move court. The Left outfits alleged that ABVP activists were involved in the violence but the saffron outfit denied it.

The counting was suspended early morning after ABVP members protested alleging they were not informed about the process. The Election Committee issued a statement saying it had made announcement for counting agents to come and was following the rules.

"The counting process, which began on September 14 at 10 pm has been suspended due to forcible entry into the counting venue and attempts to snatch away the sealed ballot boxes as well as ballot papers from our counting centres," according to the JNU Election Committee.

It said, "A malicious lie is being spread on social media and among students that the Election Committee had not made three announcements and went forth with the entry of the counting agents for post of Central Panel for combined schools and Special Centres."

The Election Committee would like to clearly state three announcement calls were made (with the third call announced as the last and final call) and communicated to the students gathered outside the counting venue) via loudspeaker, the committee said.

"After that the election committee members informed the security guards about it and asked them to gather any counting agents.

President of ABVP-JNU unit Vijay Kumar said they will not hesitate to approach the Delhi High Court if they do not get justice. "Counting of votes is being done without adhering to the rules. The EC is not following even the bare minimum requirements of election procedure."

"The biased way of handling elections has put a question mark on EC's neutrality. We have approached the Grievance Redressal Cell to seek justice. We will not hesitate to proceed to Delhi High Court if we don't get justice," he added. The ABVP said their counting agent was not informed about the beginning of counting of votes polled in science schools.

The Left bloc claimed that "around 4:00am, ABVP broke the glasses of the School of International Studies building. EC stopped the counting indefinitely." They also claimed the ABVP counting agent was called but he did not turn up on time.

Vijay Kumar said their counting agent was not called and the counting process was initiated in front of the members of the Left outfit. "We protested peacefully as the EC is biased towards the Left. We did not create any ruckus," he said.

The voter turnout in the keenly contested JNUSU election on Friday was 67.8 per cent, believed to be the highest in six years. Over 5,000 students cast their votes.

Technical glitches in EVMs had marred the counting process for Delhi University Students' Union polls on Thursday, leading to its suspension for close to three hours.