IIT Guwahati researchers have devised a paper-based sensor which can instantly determine the freshness of milk. 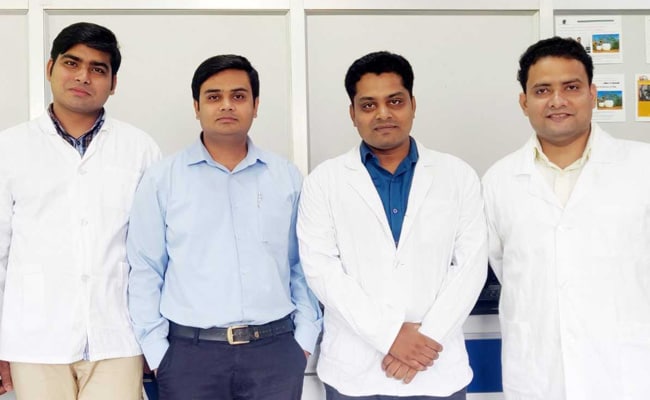 IIT Guwahati researchers have devised a paper-based sensor which can instantly determine the freshness of milk. The quality and freshness of milk are decided by the invasion and presence of microbes in the milk.

Bacteria and other microbes that can grow in milk can not only affect the taste and freshness, but can also result in health issues. Pasteurization is commonly used to kill the microbes in milk and various tests are used to ensure the effectiveness of pasteurization.

Commonly used tests such as the methylene blue test, are time consuming; it could take many hours for colour changes to indicate presence and absence of microbes. Commercial phenol-based tests require sophisticated spectrophotometers and involve multistep procedures, which necessitates dedicated testing centres and skilled personnel.

The IIT Guwahati research team led by Dr. Pranjal Chandra, Assistant Professor in the Department of Biosciences and Bioengineering along with Mr. Kuldeep Mahato, research scholar, has developed a simple visual detection technique to detect the quality of milk, without the need for special equipment and instruments. Their work was recently published in the journal, Biosensors, and Bioelectronics.

"It would be useful if the quality of milk can be tested at the point of collection of milk or even in the home kitchen," said Dr. Chandra, adding that such testing requires easy-to-operate and portable detection kits.

Explaining the research, Dr. Chandra added, "Alkaline Phosphatase (ALP) is a metalloprotein found naturally in raw milk samples and is considered an important biomarker in quality control of milk".

It is found in raw milk and is destroyed during pasteurization. ALP is also found in higher amounts in the case of milk derived from animals with infection in the mammary glands. Detection of ALP in milk can thus point to inadequate pasteurization and perhaps contamination.

"Despite ALP's recognizable detection potential in native milk, the multistep nature, and requirement of sophisticated bulky analytical instruments and trained personnel, to detect ALP, limit their use as a sensor of milk quality in remote settings and in home kitchens," added Dr. Chandra, justifying the scope and need for developing better ALP detection kits.

The researchers have used simple filter paper, chemically modified it, and loaded it with a recognition element anti-ALP, which captures the ALP present in the milk. Upon treatment of the colour forming compound BCIP to the captured complex of ALP forms a blue-green coloured precipitate, that otherwise does not gives any colour in the absence of ALP. The intensity of the colour indicates the amount of ALP present. The team used a smartphone to capture the image of the colour and used the RGB (Red Green Blue) filter in the phone to profile the colour obtained, which could be co-related to the concentration of ALP present in the test sample.

"Our sensor takes merely 13 min to detect ALP, and hence it can be applied for quick onsite analysis" said Dr. Chandra.

The researchers successfully tested milk obtained from villages and commercially available milk samples using their paper-based sensor kit, and found that they could detect down to 0.87 units of ALP per millilitre of milk to about 91-100% accuracy. This detection limit and accuracy make it possible to discriminate raw milk (often contains as high as 191U/mL ALP) from pasteurized/boiled milk which contains ALP in ultra-trace amount.

Based on the detection principle, the team has also developed a miniaturized detection kit and demonstrated the instrument-free, in-kitchen applicability of the kit for milk monitoring.

"We plan to extend the sensing platform/principle we have developed for ALP towards the detection of various molecules in different matrices. In fact, we have developed another sensor for ALP detection using a label-free bio-electronic chip. This new sensor has been developed by Mr. Kuldeep Mahato, Mr. Ashutosh Kumar, Mr. Buddhadev Purohit. The developed bio-electronic chip is an advanced version of the paper-based kit with improved accuracy", said Dr. Chandra.

"We have plans to commercialize both the variants of milk pasteurization testing kits." he also added on future plans.