An appeal from Rubin DCruz, an Assistant Editor at National Book Trust, New Delhi, through social media platform has inspired hundreds of people to come forward and be part of the noble cause.

A 'Books Challenge' for helping the floods affected school libraries has garnered the support from the people of Kerala and outside and the campaign has now collected more than 5,000 books from individual donors along with several offers from organisations and publishers. After the 'Challenge' went viral, Kerala Finance Minister Dr Thomas Isaac came out in support and asked the stakeholders to contribute the books collected through the challenge to the 'Class Library' facility which is already existing in several schools.

An appeal from Rubin DCruz, an Assistant Editor at National Book Trust, New Delhi, through social media platform Facebook, has inspired hundreds of people to come forward and be part of the noble cause.

Right now, Facebook page of Mr DCruz is filled with the images in which people from different walks of life -- writers, working professionals, school children and political activists -- contributing books as part of the 'Book Challenge'. 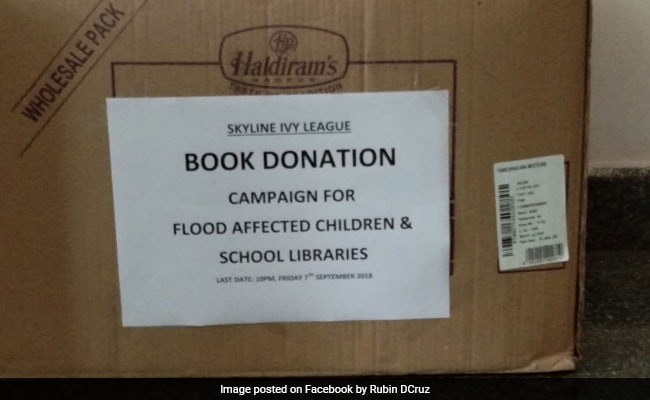 A box of books is ready to be shipped to Kerala

Bookmark, Kerala, a government agency, is working as nodal centres for book collection. According to Mr DCruz, it will also distribute the books to the flood-damaged schools.

Call For Public Participation In Rebuilding Flood-Damaged Libraries In Kerala

Publishers like Tulika and National Book trust have also offered books for this purpose and according to an official from Bookmark, there are several such offers from organisations and the number of books will go up largely after these books come in.

Kerala Finance Minister taking part in the Book Challenge (post is in Malayalam):

"We are receiving hundreds of requests from several public libraries and school libraries regarding assistance," said Ram Kumar of Bookathon, an organisation based in Thiruvananthapuram Technopark which collects books from public and then sets up libraries in Kerala.

Now, Bookathon, according to Mr Kumar, planning to enhance its area of operation to the flood affected areas.

"We are planning to set-up or repair at-least 20 libraries in these areas. But, for now, we need the support from the public in the form of books as the books we have collected so far have already been distributed to various libraries in the state. We are ready to collect the book from anywhere and people may use our Facebook page or our website for the communication," Mr Kumar said. 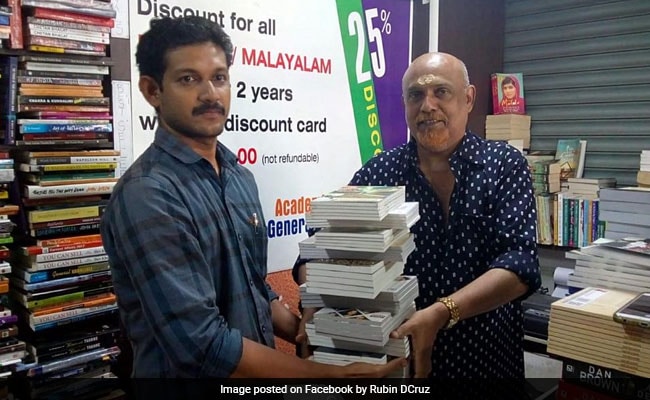 A volunteer contributing books as part of 'Book Challenge'

"Kerala flood had devastated many of the schools in the affected area including the libraries in them. Treasure of knowledge in the form of books, magazines, etc. have been totally damaged in those libraries. Rebuilding a quality book collection in these libraries, especially government run schools, is a herculean task," says Dr Shibu KM, Assistant Librarian, Pondicherry University.

"Though social media is extensively helping in collecting books through book challenge groups, government support and serious attention of other agencies are required," Dr Shibu added.

"History is not going to mark year 2018 as the year of flood but about how as a society, the Malayalees survived in a manner the world has never seen. This book collection is one such example," says Afsal Ali KT, a library professional working with Aligarh Muslim University Malappuram Campus.

"As part of flood relief works I visited many places in Kerala and witnessed the pathetic condition of many schools. I am sure this initiative would help to collect enough books," he added.

"But", Mr Ali commented that, "as a library professional my apprehension in  this regard is that whether it would be properly maintained and used without professionally qualified librarians. This is not a new issue. This is a major issue the schools in Kerala are facing for years".

He also hoped that the government and professional organisations may look into this matter too while they plan the rebuilding plans.

Meanwhile the Education Department has started the distribution of school texts in flood affected areas.

An official from the department told NDTV that the government has asked the schools and other responsible bodies to gather data about damages happened in schools and their facilities like labs and libraries.

Rubin DCruz's appeal for the books (post is in Malayalam):