RSS-affiliated ABVP has won three posts of president, vice-president and joint secretary in DUSU elections while Congress's NSUI secured secretary seat. ABVP candidates Ankiv Basoya, Shakti Singh and Jyoti Choudhary have won the posts of president, vice president and joint secretary posts respectively. NSUI candidate Akash Choudhary has won the post of secretary. The counting process for Delhi University Student Union or DUSU election was resumed after a brief interruption because of technical problems.The counting was stopped earlier in the afternoon after the students raised complaints of electronic voting machines or EVMs malfunctioning.

Meanwhile, the office of the Chief Electoral Officer in Delhi clarified that the EVMs used in DUSU election have not been issued by the Election Commission and it seems to have been procured privately.

Voting for the DUSU election ended yesterday with 44.46% voter turnout. The poor voter turnout is only marginally better than last year when only 43% students cast their votes.

This year total of 23 candidates were contesting elections for 4 vital DUSU posts - President, Vice-President, Secretary, and Joint Secretary. The counting of votes began today at the Community Hall, Police Lines, Kingsway Camp, Delhi. The counting, as reported by certain media outlets, was stopped due to glitches in the EVMs.

The voting process had carried on till 7:30 pm in the evening yesterday and students from both morning and evening colleges participated in the process.

This year CYSS, the AAP's student wing, formed an alliance with AISA to contest the elections.

As part of their election agenda, NSUI had promised the "Institute of Eminence" tag for Delhi University and thalis for Rs. 10, while ABVP had promised to spend 50 per cent of the union's budget on women and social justice-related activities, along with a special attention to promoting sports and installing sanitary pad vending machines on college campuses.

September 13, 2018, 9:30 pm: The office of the Chief Electoral Officer in Delhi clarifies that the EVMs used in DUSU election have not been issued by the Election Commission and it seems to have been procured privately.

EVMs haven't been issued/allotted to Delhi University by this office. It was also confirmed from State Election Commission that no such machines have been given by them too. It seems that Delhi University has procured these machines privately: Manoj Kumar, Election Officer, EVM pic.twitter.com/yyf5AKoyKW

September 13, 2018, 9:10 pm: ABVP's Shakti Singh is in a safest position to win the vice president post as his leads were humongous from the beginning.

September 13, 2018, 7:25 pm: After 12 rounds, according to a source from the counting centre, RSS-affiliated ABVP is leading in three central panel posts; president, vice president and joint secretary. Congress's NSUI is leading in one post; secretary.

September 13, 2018, 6:15 pm: According to sources present at the counter, the counting for the DUSU election results resumed at 6.05 after it was stopped in the afternoon.

NSUI statement on the unprecedented and shameful episode of blatant EVM tampering in #DUSUElection2018 today. We demand that NSUI candidates who were leading should be declared winners, no credibility of the counting process now #DUSU2018pic.twitter.com/VUNC7cTYc2

September 13, 2018, 5:15 pm: Counting for the student union polls which was stopped midway on Thursday due to "faulty EVMs" and the "students' uproar over it" will resume in half an hour, an university official said. 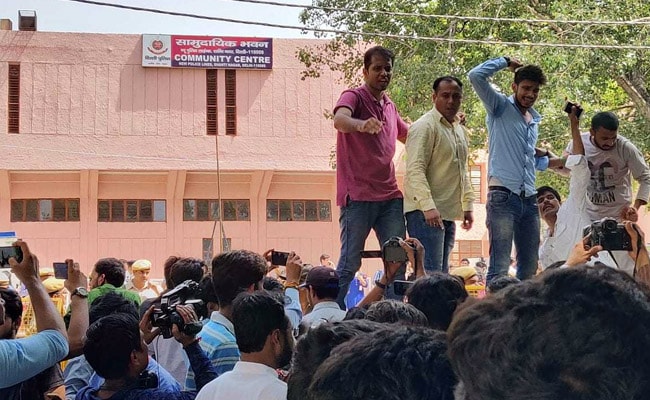 DUSU election result 2018: Students were protesting after complaints on EVM malfunction was reported

September 13, 2018, 4:15 pm: Sources claim that EVMs were showing votes for candidate number 10 when only 9 candidates where in fray including the NOTA option.

September 13, 2018, 2:45 pm: Reports have emerged that ABVP has demanded to resume counting while NSUI is protesting against resuming counting today.

September 13, 2018, 2:30 pm: The University has not made any formal announcements about the resuming of counting process. Students are advised to not follow any other sources apart form the official source.

September 13, 2018, 1:30 pm: Counting stopped for one day due to technical glitch in some EVMs. More details to be announced soon.

September 13, 2018, 1:25 pm: NSUI alleged that the admin is tampering with EVMs since ABVP is losing. Security increased at counting centre.

September 13, 2018, 12:45 pm: So far, NSUI and ABVP are neck to neck with NSUI leading for President and Secretary posts and ABVP leading for Vice-President post.