In a notice forwarded by CBSE to NDTV, the board has warned students that a question paper of class 12 Hindi (Elective) is being circulated on social media.

CBSE Warns Against Fake Class 12 Hindi (Elective) Question Paper
New Delhi: After the alleged paper leak in class 12 Economics board exam CBSE has become quick on their feet about all such future occurrences. As insisted by the Secretary for School Education, Anil Swaroop in the press conference yesterday, that since the beginning of the board exams, miscreants have been circulating fake question papers across social media. Even though fake, these question papers are enough to cause panic and stress among the students. 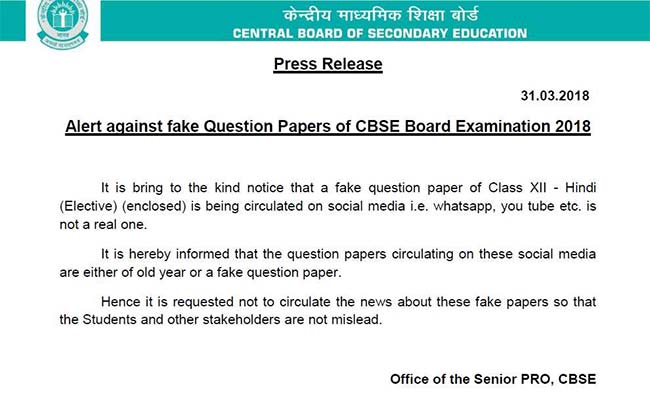 Earlier when the board had cancelled the examination for class 12 Economics and class 10 Mathematics paper, several fake notifications about re-examination dates and schedule were doing the rounds before even CBSE announced the re-exam dates. The fake notifications and question papers have caused a huge jolt to CBSE board exams this year.

CBSE has scheduled the re-exam for class 12 Economics on April 25. The decision about class 10 Mathematics re-exam is yet to be made.