If you are waiting for the re-exam dates of CBSE Class 10 maths and Class 12 economics papers, you need to stay away from some misinformation being spread through several social media platforms.

Several fake notifications are being shared on social media regarding the CBSE re-exam dates
New Delhi: If you are waiting for the re-exam dates of Class 10 maths and Class 12 economics papers, you need to stay away from some misinformation being spread through several social media platforms. While some miscreants are spreading fake notifications carrying information about dates - which are yet to be announced --, some notifications are being shared on social media say the exams being held only for Class 10 maths only not for Class 12 Economics.

Two exams have been cancelled.

The CBSE, on last Wednesday i.e March 28, decided to conduct re-examinations for mathematics paper of class 10 and economics paper of class 12 in view of the information received about the likelihood of the 'Exam having been compromised'. CBSE has filed complaints with the Delhi police in this regard. The CBSE has also instituted an internal inquiry into the matter with a view to secure all future exams.

CBSE is yet to announce re-examination dates

The fresh dates for the re-conduct of the two exams shall be announced before the end of the week, after taking into consideration the dates of other professional exams and logistics, said CBSE. 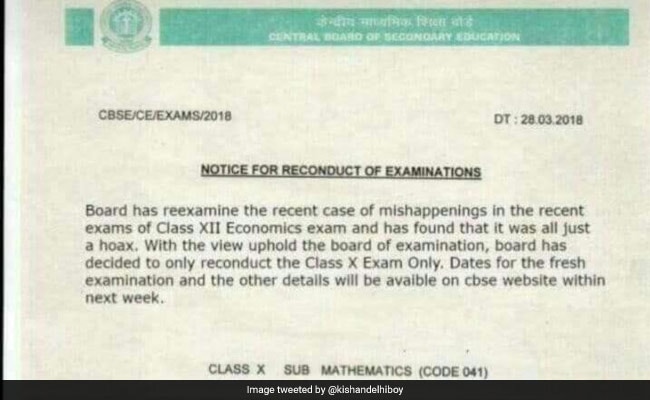 
This fake notification says the "board has reexamine (sic) the recent case of mishappenings in the recent exams of Class XII Economics exam and has found that it was all just a hoax. With the view uphold the board of exanimation (sic), board has decided to only reconduct (sic) the Class X Exam Only. Dates for the fresh examination and the other details will be available on cbse website within next week".

Read this notification properly. And you want more proofs? 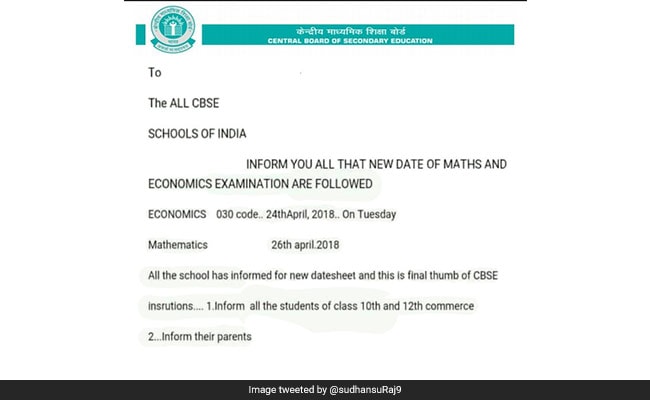 Look at the 'notificaiton'! Does it look like original?

"All the school has Informed for new datesheet and this is final thumb of CBSE institution (what is this)," says the fake notification.

The reality is: CBSE is yet to announce new dates.

Incentive Mechanism For Institutions To Reward IoEs That Are Doing Well: Education Minister At Review Meeting

India Ranks 6th Most Positive About Teachers In 35-Country Survey