Almost 50 % students fail in Bihar Board BSEB matric class 10 exams this year. The results are available at biharboard.nic.in

BSEB Bihar Board 10th Results @ biharboard.ac.in: Almost 50 % Fail In BSEB Matric Exams 2017
New Delhi: In the BSEB Bihar Board matric results declared today, with a marginal improvement of 3% over last year almost half of the students who have appeared in the class 10 board exams failed. Bihar School Examination Board (BSEB) has earlier decided to give grace marks to students who have failed in one or two subjects in the matriculation examination this year, still, the 50.12 percentage success rate is a reason to worry. The Bihar Board class 10 or matric results are available on biharboard.ac.in.

The board today, on June 22, declared the results after postponing it more than two times.

Out of the 17,23,911 examinees appeared in the exam, 8,63,950 or 50.12% students candidates have qualified for the higher studies. More than 8 lakh students failed in the matriculation examination this year.

Bihar board chairman Anand Kishor said it was for the first time that codes were used on answer-sheets to ensure that no unfair means were employed during evaluation.

A senior BSEB official said the low pass percentage vindicated their efforts to conduct a cheating-free examinations this year.

Closed-circuit television was installed at the entrances to examination halls and videography conducted during examinations.

Use of all communication gadgets, including mobile phones, inside examination halls was disallowed.

This year, according to the board chairman, BSEB introduced physical verification of Top 10 students and they were already notified about this process.

This move comes after an episode of a toppers' story of class 12 results this year brought infamy to the BSEB.

As in the case of last year, when a girl candidate drew national infamy after she said "political science" is about cooking, This year, another topper in humanities, stumbled over queries posed by the media on music, in which he scored 65 out of 70 in practicals.

Prem Kumar of Govind High School of Lakhisarai district topped the board, scoring 465 out of 500 marks. He was followed by Bhavya Kumar of Simulitallah School in Jamui district, who scored 464 marks. Harshita, also from Simulitallah School, came in third, reported IANS. 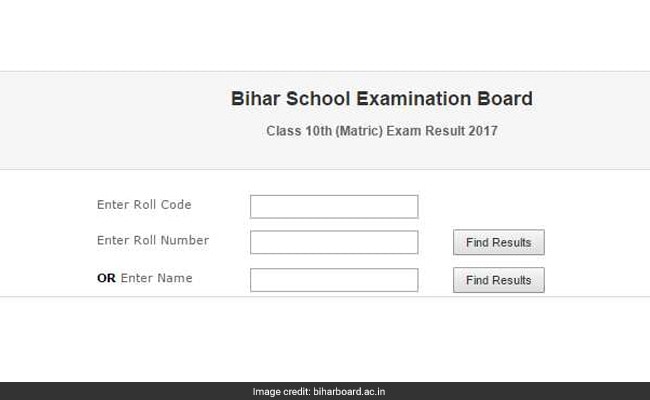 Bihar Board Class 10 or Matric results have been declared today

This year proved to be the worst for Bihar board class 12 students as only 30.11 per cent students managed to pass the exam in science stream.

The situation was not good in Arts stream either where the pass percentage was a mere 37.1 per cent.

Commerce stream students did well and 73.76 per cent students passed the board exam.

IIT Entrance Exam, JEE Advanced, To Be Held On September 27