Australia is exploring the possibility of setting up offshore campuses of its premier universities across India. 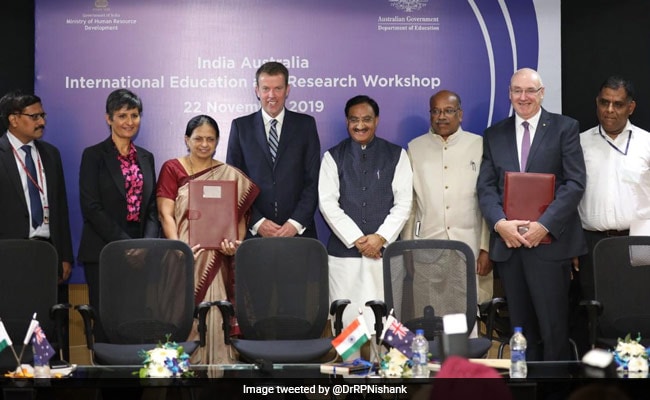 Australia is exploring the possibility of setting up offshore campuses of its premier universities across India and considering mutual recognition of degrees by the two countries, in a move to eye further expansion in the already-close educational ties.

In an interview to PTI, Australian Education Minister Dan Tehan said the two issues were discussed in his meeting with Human Resource Development Minister Ramesh Pokhriyal ''Nishank'' on Friday.

The move assumes significance in wake of the Indian government mulling giving a green light to foreign universities for setting up of their campuses in India.

The issue has been long debated in India and the University Grants Commission (UGC) currently allows foreign universities to operate in India only in collaboration with an Indian higher educational institution partner.

"We discussed about whether we can promote offshore campuses of Australian universities and set up their campuses in India," said Mr. Tehan, who is in India on a three-day visit that ends on Friday.

"We also discussed whether we can look at the establishment of Indian universities'' offshore campuses in Australia so that it is a mutually-beneficial approach," the minister said.

With the possible change in rules, foreign universities will be allowed to set up their own campuses in India. The idea has been proposed in the Higher Education Commission of India Bill (HECI), which is likely to be placed before the Union cabinet soon.

"We have begun the conversation on setting up of offshore campuses in India and this is something both sides want to explore considering the fact that Australia, through its offshore campuses, educates nearly a quarter of our international students," Mr. Tehan said.

"We are interested in making a progress on this, but there has to be reciprocity," he said. "We have also said this to the Indian side that if they want to explore an offshore campus in Australia, we will be prepared to look into that."

According to official statistics, there are 1.09 lakh Indian students in Australia at present.

Exploring a ''France-like'' agreement, Mr. Tehan said: "We discussed about mutual recognition of qualifications by the two countries. India has an arrangement with France and we want to put in place a same framework which will enable us to more freely exchange students or fellows."

"We want to work with India in helping it to implement its reform agenda. There are similarities between what (the) Indian government is planning in NEP and we have just reviewed the Australian qualification framework," Mr. Tehan said.

"We have also offered through our regulator to have an exchange of views about how we use our regulator to ensure quality and excellence," he said. "We can help in a system Indian government is putting in place."

(Except for the headline, this story has not been edited by NDTV staff and is published from a syndicated feed.)
Comments
Study AbroadStudy in Australia