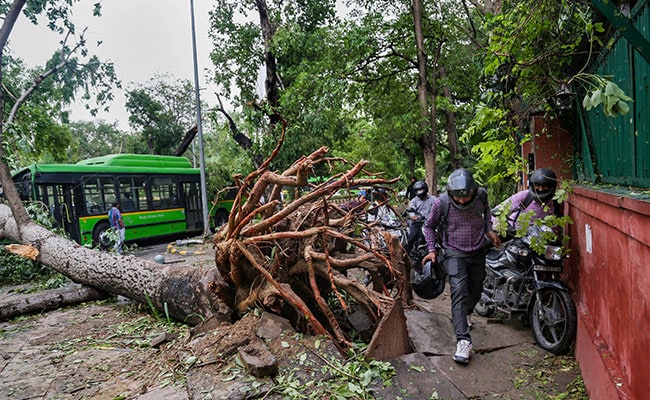 Delhi may witness a thunderstorm today, with wind speeds up to 30 kmph. The maximum temperature is predicted to settle around 40 degrees Celsius, the India Meteorological Department said.

"An east-west trough is running from Haryana to Bangladesh at the lower tropospheric levels. Under its influence, parts of Punjab, Haryana, western Uttar Pradesh, eastern Rajasthan and Uttarakhand may witness scattered rainfall," the weather forecast said.

Some parts of Delhi may also get a thunderstorm today which will keep the temperatue in check, said Mahesh Palawat, vice president (climate change and meteorology), Skymet Weather.

A heatwave is unlikely in Delhi for a week, he said.

A ravaging thunderstorm with wind speeds of 100 kmph had pummeled the national capital on Monday evening, uprooting trees, damaging property, disrupting internet and power supply and bringing traffic to a halt.

It was the first storm with a wind speed of 100 kmph or more since June 9, 2018, when Delhi's Palam area had recorded a wind speed of 104 kmph, a weather department official said. A moderate thunderstorm hit the city on April 23.

There is a greater chance of a sudden development of such powerful thunderstorms in May and June due to high temperatures and high humidity. Such developments cannot be predicted a day or two in advance, said an IMD official.