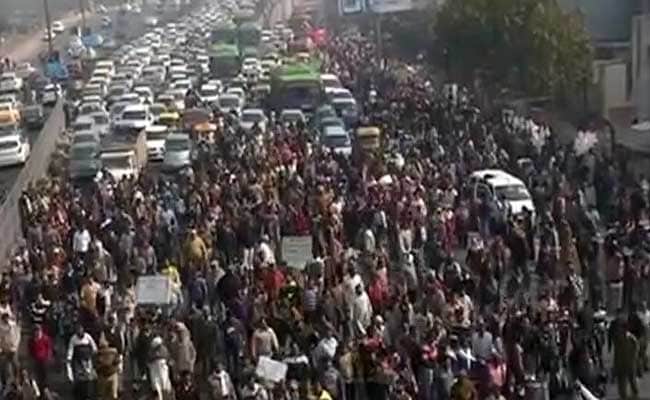 The strike has crippled functioning of hospitals and schools run by civic bodies, besides garbage disposal in Delhi.

New Delhi: The striking workers of Municipal Corporation of Delhi  today blocked major roads in the capital throwing peak hour traffic out of gear even as the Delhi government suggested that the continuing protests, that have brought the city to its knees, were "political" and instigated by BJP.

Commuters had a harrowing time as traffic came to a standstill in various parts of the city as sanitation workers blocked major thoroughfares such as National Highway (NH) 24 and Vikas Marg among others. They dumped garbage and set tyres ablaze on the roads.

He questioned the role of councillors and mayors of the BJP-ruled corporations in the protests. The three civic bodies told the Delhi High Court yesterday that the employees have been paid salaries till December 2015.

"It seems like politics now. If they have indeed paid salaries then why stage such protests? BJP is doing politics and misleading people. What explains the presence of mayors and BJP councillors in the protests otherwise?" Mr Jain asked.

He said that "no one" could be sure as to whether the Municipal Corporation of Delhi (MCD) authorities had stated the truth in the court.

The Lt. Governor has expressed fear that further protests may cause law and order problem in the capital.

The strike has crippled functioning of hospitals and schools run by civic bodies, besides garbage disposal even as the Delhi government continues to insist that it has already released the entire fund to the municipal bodies under non-plan head.

Thousands of agitators yesterday took out a protest march from the Civic Centre to Rajghat carrying begging bowls to draw attention to their demands.