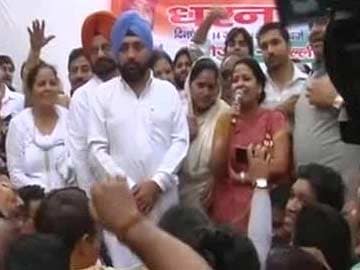 New Delhi: The national capital has been witnessing several street protests by the Congress against massive power cuts in Delhi. Today, President Pranab Mukherjee's daughter Sharmistha too took to the streets, calling the situation unprecedented.

The Congress leader said she had not seen such power cuts in the last 15 years and the BJP-led central government must take urgent steps to address the city's growing power woes.

"I am part of Congress. I am a citizen of Delhi. This is unprecedented situation. I have never seen so many power cuts in Delhi over the past 15 years. I felt as a citizen it's my duty and right to protest," 48-year-old Ms Mukherjee said.

Earlier today, Delhi Congress leaders Arvinder Singh Lovely, Sajjan Kumar and Mukesh Sharma were detained by the police at the Nangloi railway station, as they tried to block trains there in protest against the water and power crisis in the capital.

Promoted
Listen to the latest songs, only on JioSaavn.com
The Congress leaders were accompanied by around 150 supporters who tried to storm into the railway station, when they were stopped by the police. Water cannons were also used to control the crowd. (Read: Delhi Congress Leaders Detained Over Protests Against Power Crisis)

Following a storm May 30, which damaged transmission lines in Delhi, the city has seen erratic and long power cuts in sweltering heat.