Only 46.3 Per Cent Votes Cast In Delhi MCD By-Poll On Rainy Sunday 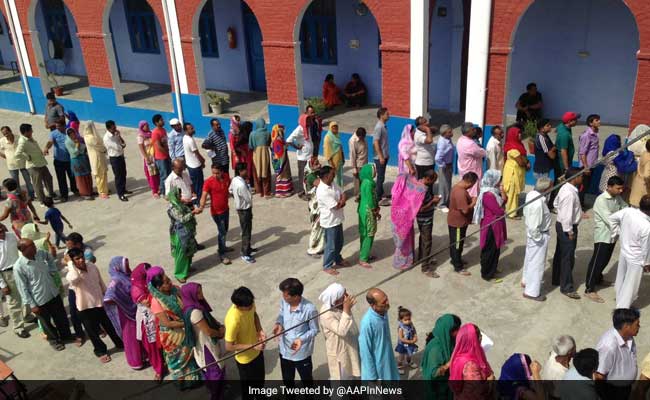 People stand in a queue to cast their vote in the Delhi Municipal Corporation election. (File photo)

The voting percentage at Sarai Pipal Thala in the 2012 MCD election was 60.6 per cent. The by-poll this time thus saw a decline of over 14 per cent votes, the official said.

Power failure due to rain and dust storm in New Delhi disrupted polling in the final hour at some of the 57 polling booths. "Otherwise, voting was peaceful," the official said. Voting started on a slow pace with 8.59 per cent votes cast till 10 am.

In April, election at Sarai Pipal Thala and Maujpur wards was postponed after the candidates died, while voting in the rest 270 wards of Delhi's three municipal corporations was held on April 23. The results were announced on April 26.

Promoted
Listen to the latest songs, only on JioSaavn.com
The main contenders at Sarai Pipal Thala ward include Mohammad Sarif of the BSP, Mukesh Goel of the Congress, Mangat Ram of the Bharatiya Janata Party or BJP, and Rajeev Bansal of the Aam Aadmi Party or AAP. Mukesh Goal is also the former leader of opposition in the North Delhi Municipal Corporation.

The votes for Sarai Pipal Thala and Maujpur wards will be counted on May 23.