Not On Strike, Being Victimised, Delhi's IAS Officers Tell Media

Chief Minister Arvind Kejriwal has accused the Centre and the Lieutenant Governor of backing what he called the "strike" by the IAS officers.

IAS officers have levelled the allegations by AAP government as "completely false and baseless".

New Delhi: The IAS officers of Delhi, who are at the heart of a huge stand-off between the elected government of Arvind Kejriwal and the Lieutenant Governor,  the Centre's representative, today held an unprecedented press conference to allege that they were being victimized in a political battle. The officers said misinformation was being spread about them, even though they were "apolitical" and  "neutral" and  were "answerable only to the law and the constitution".

Chief Minister Arvind Kejriwal has accused the Centre and the Lieutenant Governor of backing what he called the "strike" by the IAS officers.  His government says work has been suffering for the last four months since the officers won't meet ministers or attend their phone calls.

Calling the allegations "completely false and baseless", the officers said "We are not on strike. We are attending all meetings, doing all our work". They skip only the meetings in which they felt their "safety" and "self-respect" were at risk, they said.

"Routine meetings and statutory meetings are different, we attend the latter," said IAS officer Manisha Saxena, adding, "We have no confidence, no one has reached out to us to boost our confidence". 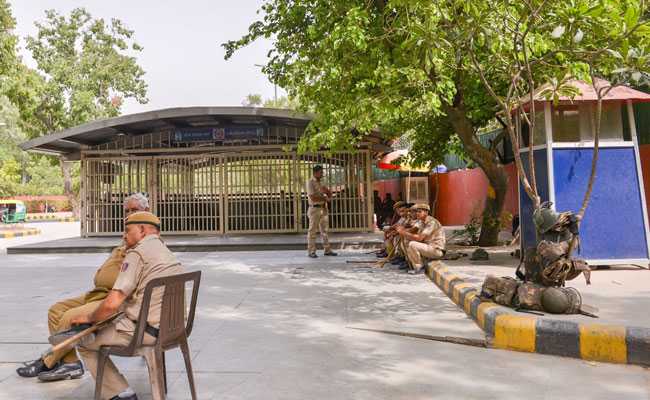 Five metro stations have been shut down ahead of the AAP's march to PM's house.

This has been the stance of the association since the alleged attack on the Delhi Chief Secretary in February, when he had gone to attend a meeting at the Chief Minister's house. While two AAP leaders were arrested for the attack, the police are yet to conclude their investigation. Daring the police to file a chargesheet, AAP says the allegation is fabricated.

The officials denied government allegations that work was suffering at mohalla clinics - a project that earned praise abroad. Overall, 164 clinics are operational, 33 sites are ready for possession, "all officers participate in improving services for Delhi," another officer said.

Promoted
Listen to the latest songs, only on JioSaavn.com
Regarding last week's unattended meeting called by the Delhi Environment minister, the IAS officers said it was called on "very short notice". "The Environment Secretary could not reschedule his pre-scheduled meetings... he is also responsible for other departments," an officer said.

The officers denied AAP claims that they were toeing the line of the Centre and the Lieutenant Governor. "We are not working on anyone's behest, please communicate this. Camera recordings cannot show our mental anguish," Ms Saxena added.