"Nayak 2 Is Back Again": Poster At Arvind Kejriwal's Swearing-In Venue

AAP Arvind Kejriwal oath ceremony: A banner at Ramlila Maidan has the text, "Nayak 2 is back again". 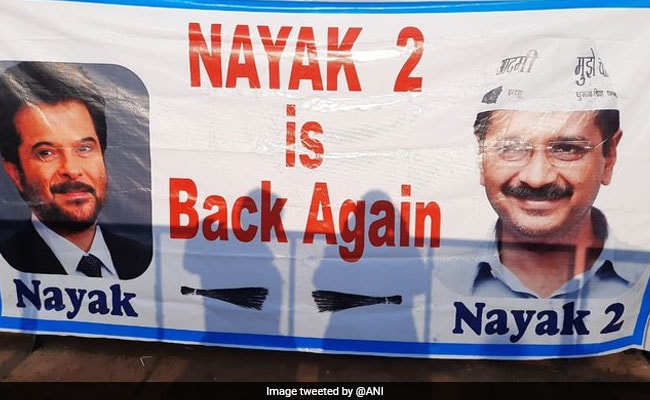 The Aam Aadmi Party is upfronting its core policy thrust and Arvind Kejriwal's image as a "common man" with creative posters at Delhi's Ramlila Maidan, where the party chief will take oath as chief minister for a third time.

A banner at Ramlila Maidan has the text, "Nayak 2 is back again". It has a photo of actor Anil Kapoor in a black suit on the left, while a smiling Mr Kejriwal in a white cap usually worn by AAP supporters is seen on the right.

The poster is a reference to Anil Kapoor starrer "Nayak", released in 2001. In the film, Anil Kapoor plays the chief minister of Maharashtra for one day and goes on a whirlwind anti-corruption drive. The 2001 "Nayak" was a remake of the 1999 Tamil film "Mudhalvan".

Mr Kejriwal's AAP won 62 of the 70 seats in the Delhi assembly, leaving just eight for the opposition BJP, in a near-identical result to the 2015 elections.

Mr Kejriwal has invited Prime Minister Narendra Modi, seven BJP parliamentarians who represent the city and all eight newly-elected BJP MLAs to his swearing-in ceremony. The Prime Minister, however, is scheduled to visit his constituency Varanasi to inaugurate various projects and is likely to not attend the swearing-in.