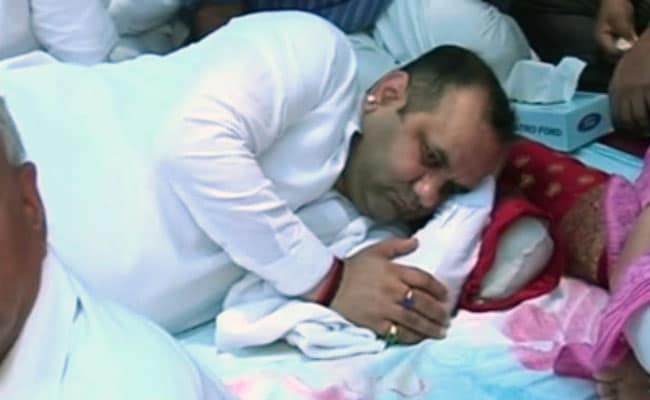 "I want that he (Maheish Girri) should end his hunger strike on humanitarian grounds, I don't want the issue to be politicised," Iqra Khan told news agency IANS.

"This politics isn't helping us in any manner," she added.

"I am not blaming anybody, but investigation in my father's case should be carried out in a fair and unbiased way. That's what I am asking for and that's what the CM has also asked for," Ms Khan said.

She expressed gratitude to Mr Kejriwal for helping their family and "giving our father the status of martyr". Ms Khan said that Mr Girri had "never visited our house and nor consoled us a single time".

Mr Girri, who represents East Delhi in the Lok Sabha, on Sunday sat on hunger strike outside Mr Kejriwal's residence after the Delhi chief minister didn't turn up for a public debate on the allegations he has levelled against the parliamentarian.

Mr Kejriwal has been saying that Mr Girri and New Delhi Municipal Council vice chairman Karan Singh Tanwar, who also belongs to the BJP, played a suspicious role in the murder of Mr Khan.

Mr Khan, an estate officer with NDMC, was shot dead in New Delhi on May 16, a day before he was expected to pass an order on the terms of the lease of The Connaught, a four-star hotel.

The hotel's owner, Ramesh Kakkar, was arrested along with six others for the murder of Mr Khan.

She urged the Bharatiya Janata Party (BJP) lawmaker to take up his fight with Mr Kejriwal on any other issue.

"My father died for the government and when this issue is politicised, we feel hurt," she added.

Ms Khan, 23, is a final year student of MBBS at Jamia Hamdard University in Delhi.