Election Results: Gautam Gambhir's campaign in East Delhi did not fall short of controversies, with the Aam Aadmi Party rival Atishi accusing him of distributing defamatory pamphlets against her. 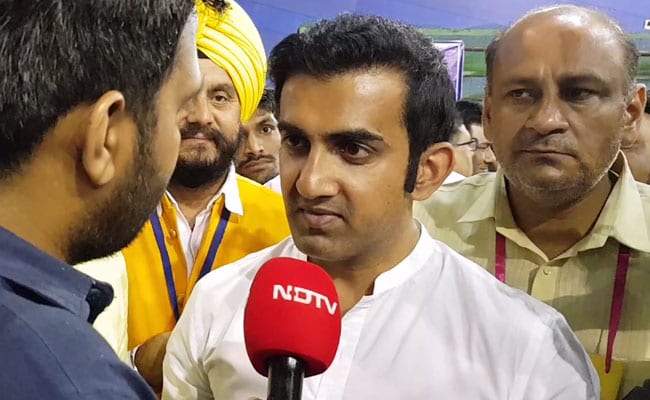 Gautam Gambhir won the East Delhi seat, getting more than half of the vote share

Cricketer-turned-politician Gautam Gambhir speaks with NDTV after his remarkable election victory in Delhi. Mr Gambhir speaks about his campaign, about allegations made against him by the Aam Aadmi Party, and what his plans are for Delhi. He also has a message for AAP chief Arvind Kejriwal.

Gautam Gambhir, the former cricketer who was elected to the Lok Sabha just two months after he joined politics, said he fought the parliamentary election in a positive way and that he did not make any false promises.

The 37-year-old was named the BJP candidate from East Delhi soon after joining the party in March.

"We didn't say anything wrong about any individual in our campaign. We didn't make any false promises. We fought the polls in a positive way. This is the hard work of the BJP workers who campaigned for me day and night," Gautam Gambhir told NDTV.

However, Mr Gambhir's campaign in East Delhi did not fall short of controversies, with the Aam Aadmi Party rival Atishi accusing him of distributing defamatory pamphlets against her. Mr Gambhir, who retired from cricket in December after a 15-year stint, responded to the allegations with a defamation notice and said he would quit politics if the charges against him are proven.

"In this election, Arvind Kejriwal has lost his ground. He will lose his party in eight months. The amount of muck that they have spread in Delhi in the last 4.5 years, that much of lotus will bloom in the next eight months," Gautam Gambhir said a day after the BJP's stunning victory across the country, paving way for Prime Minister Narendra Modi's return for Term 2.

Mr Gambhir made the comments, targeting Delhi's ruling party ahead of the assembly election next year.

While Mr Gambhir bagged 6.96 lakh votes, getting more than half of the vote share, the Congress candidate got over 3.04 lakh votes. Ms Atishi finished third with 2.19 lakh votes and 17.44 per cent vote share.

"We spoke of the Ghazipur landfill, clean water, education and women's safety in our vision document. We will focus on these instead of false promises that we will make East Delhi constituency like London and Paris," he said.

Railways To Provide 75 Isolation Coaches With 1,200 Beds As Covid Care Centers To Delhi