The CAQM, short for the Commission for Air Quality Management, last week ordered a halt on construction and demolition work in the national capital to stop air quality from worsening 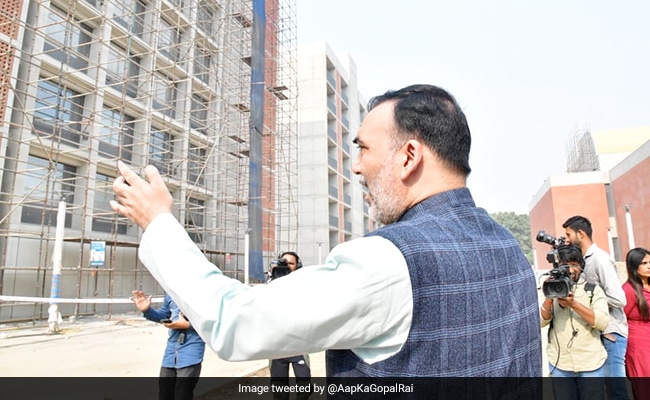 The Delhi government has issued notice to stop construction work at the BJP headquarters in the national capital and imposed a fine of Rs 5 lakh on engineering firm Larsen & Toubro Ltd for violating the ban on construction and demolition work due to air pollution, Environment Minister Gopal Rai said today.

Officials said the minister saw construction work at the BJP headquarters at central Delhi's Deen Dayal Upadhyay Marg while he was returning after checking the site of the Unique Identification Authority of India, the controlling body for Aadhaar.

"The workers said the work concerned the BJP's national headquarters. It is a complete violation of CAQM's orders. We have issued an order to stop work at the site and imposed a fine of Rs 5 lakh on the construction agency L&T," Mr Rai told reporters.

The CAQM, short for the Commission for Air Quality Management, last week ordered a halt on construction and demolition work in the national capital to stop air quality from worsening.

The CAQM is a statutory body formed in 2021 to tackle air pollution in Delhi and the National Capital Region, or NCR.

It allowed only essential projects to carry one during the period of the ban, as part of the Graded Response Action Plan, or GRAP. The construction ban does not apply to projects linked to national security, defence, railways and metro rail, among others. But it is likely to affect housing projects in Noida, Ghaziabad and Gurugram, among other areas. Mining is also not allowed in the region.

The GARP monitors and recommends steps to be taken based on the severity of pollution in Delhi-NCR.

The next stage in the "severe plus" category can include steps like ban on the entry of trucks to Delhi; allowing 50 per cent staff to work from home in public, municipal and private offices; closure of educational institutions and the running vehicles on alternate days based on odd or even number licence plate.