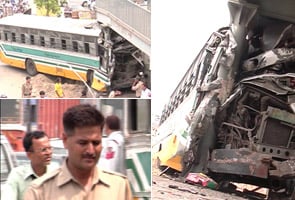 New Delhi: Delhi's 'killer' Blueline buses, which earned notoriety for over-speeding, will go off the roads from tomorrow in tune with a deadline set by the city government, which today said the ambitious cluster bus service will be launched next week.

Transport Minister Arvinder Singh Lovely said the government has no intention to extend the deadline, which expires today, and maintained that the Delhi Transport Corporation will be able to cater to the transportation needs of the people in the capital.

Today is the last day for 840 Blueline buses, which were given permission to run after December 14 when the government extended its deadline for shunting out of the buses as part of efforts to streamline the public transport system in the city.

"The deadline ends today. From tomorrow, no Blueline bus will ply on capital's roads. There is no need for extending the deadline," Lovely said.

"Why should we?" asked Lovely in reply to a question whether the deadline will be extended.

He also said the ambitious cluster bus service to be run by corporate entities will be launched next week.

Transport Commissioner R K Verma said the cluster bus service will be launched with 50 buses anytime between February 7 and 10 along the Bus Rapid Transit (BRT) corridor in south Delhi.

"The cluster bus service will be launched in south Delhi area between February 7 and 10. Initially, 50 buses will be in service in the area. We are confident of increasing the number gradually," he said.

Verma said the 840 Blueline buses have been given notice to surrender their permits by today.

"If any vehicle is found running from tomorrow, we will impound it," he said.

He said the Transport Department has made elaborate arrangements to check whether Blueline buses are plying on roads from tomorrow.

Officials will keep a watch on vehicles and squads will be posted at important junctions to impound such vehicles.

"The Blueline buses have almost disappeared from south. They are plying only in east Delhi and other areas. Steps will be taken to ensure that these buses don't ply," he said.

The Transport Department is confident that DTC will cater to the needs of the people with a fleet of 6,200, including 3575 low-floor buses.

Verma said the DTC would include 500 buses in its fleet from tomorrow so as to facilitate people's travel.

The Delhi transport department last year had divided nearly 650 bus routes in the city into 17 clusters, which included both profitable and non-profitable routes and had decided to give each cluster to a private operator through bidding process.