Around 50,00 women and men, all clad in white, converged at the venue and participated in the mass yoga event organised by the Brahma Kumaris. 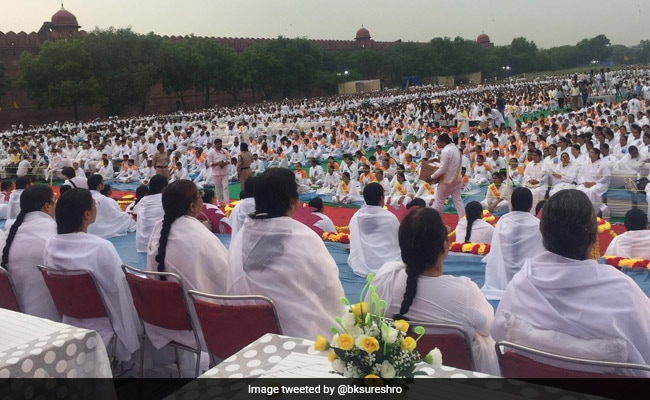 Rajyoga Meditation by Brahmakumaris at Red Fort in New Delhi.

New Delhi: The lawns of the Red Fort today turned into a sea of white as a huge gathering of yoga enthusiasts including followers of Brahma Kumaris joined to celebrate the International Day of Yoga.

Braving rains, around 50,00 women and men, all clad in white, converged at the venue and participated in the mass yoga event organised by the Brahma Kumaris.

The event began with the live telecast of the speeches of the Prime Minister Narendra Modi and Uttar Pradesh Chief Minister Yogi Adityanath at three screens installed at the venue following which they performed yogic exercises.

The organisers said that they had put up six screens but due to rains three of them malfunctioned.

BJP MP from Unnao, Sakshi Maharaj also participated in the grand event. Minister of Science and Technology and Environment, Harsh Vardhan and Delhi BJP chief Manoj Tiwari, who were scheduled to attend the event, did not turn up.

Rains failed to dampen the spirit of participants who performed with enthusiasm at the event.

"When we had started it was raining heavily. We were apprehensive whether the event will take place. We reached only to find a huge gathering," said Sujata Malhota, a teacher.

The programme was supported by the Ministry of AYUSH.

(Except for the headline, this story has not been edited by NDTV staff and is published from a syndicated feed.)
Comments
Brahma KumarisRed FortYoga in Red Fort