"In The Interest Of The Party...": PC Chacko Writes To Sheila Dikshit

PC Chacko's letter comes as the Congress faces problems in various states, most notably in Karnataka where the Congress-Janata Dal Secular alliance could fall after 16 lawmakers resign in over two weeks 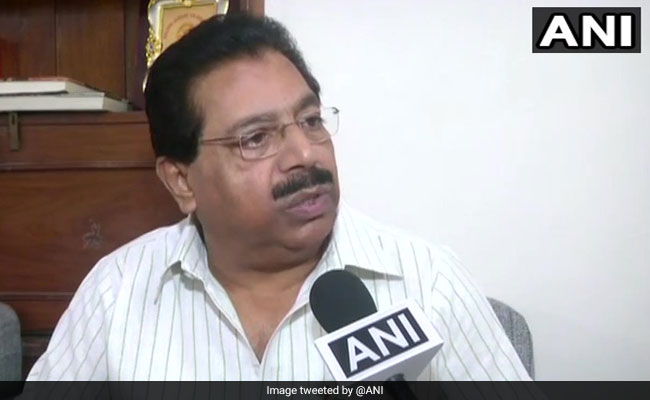 Cracks within the Delhi Congress widened yesterday after Delhi in-charge PC Chacko wrote to state chief Sheila Dikshit informing her that "as you are not keeping well" he had directed working presidents to act independently in their areas. The Congress leader reminded Ms Dikshit that Delhi polls were fast-approaching and the party needed to be "streamlined as early as possible".

In his letter, Mr Chacko wrote: "As you are not keeping well and hospitalized and I did not receive any reply to any of my letters, in the interest of the party, I am authorizing Working Presidents to hold meeting of DCC Presidents and Block Presidents of their respective areas to take appropriate decisions to activate the party and report to you the decisions taken."

Yesterday's letter was the fourth sent by Mr Chacko following those on June 29, July 1 and July 13.

In a move that prompted the letter-writing spree, Ms Dikshit had last month appointed district and block-level observers to strengthen the party with an eye on Assembly polls last year. The committees were elected last year when Mr Maken headed the Delhi Congress.

Mr Chacko objected to the appointments, claiming the decision was taken "without consulting" either him or the three working presidents - Rajesh Lilothia, Haroon Yusuf and Devender Yadav.

"I am sorry to say that a senior leader of your stature should not have flouted the AICC directive and taken this decision," he said in his letter dated July 13. 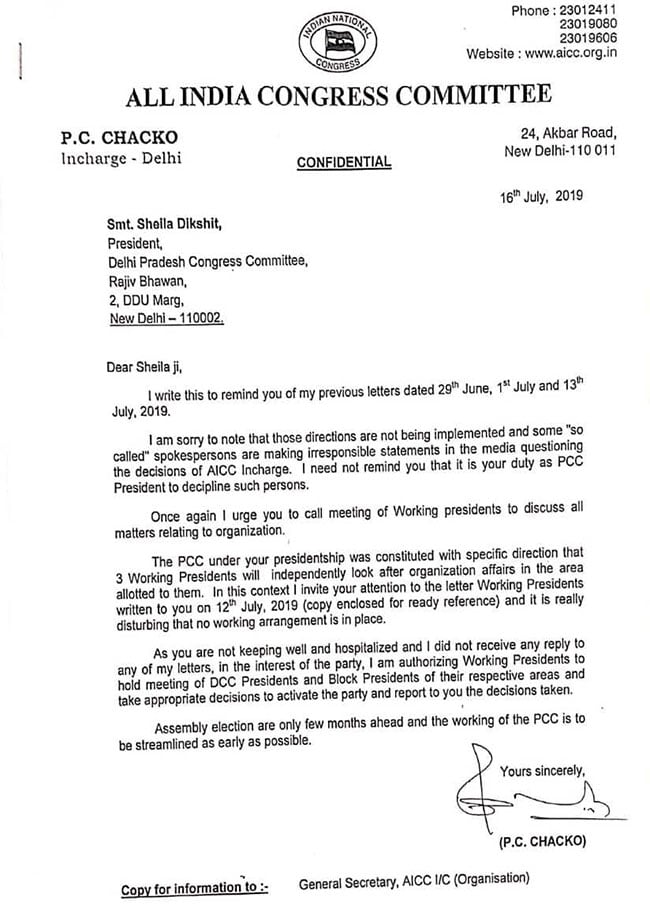 The decision, which came after what seemed to be an attempt at mediation between the two by Rahul Gandhi, upset senior leaders.

"The decision to disband the block committees formed under presidentship of Maken is an attempt by Dikshit to stamp her authority by reconstituting them under her leadership," a senior leader was quoted in a PTI report.

The Congress faces a fight to regain relevance in Delhi after losing all seven parliamentary seats to the BJP.  In addition, the rift between senior Delhi leaders comes as the party faces internal struggles across the country.

The Congress-Janata Dal Secular alliance in Karnataka is in trouble after 16 alliance lawmakers resigned over two weeks. If the resignations are accepted, the state government will lose its majority. The alliance faces a floor test at 11 am tomorrow.

The party is also in trouble in Goa, where it has lost 10 lawmakers to the BJP; that leaves them with only five seats to the BJP's 27 in a 40-member house. In Punjab senior leader Navjot Singh Sidhu sent his resignation to Chief Minister Amarinder Singh. The two had previously clashed over the party's performance in Lok Sabha polls.