The tests would be conducted free of cost for the people of Delhi and the reports will be available in six to eight hours, an official spokesperson said. 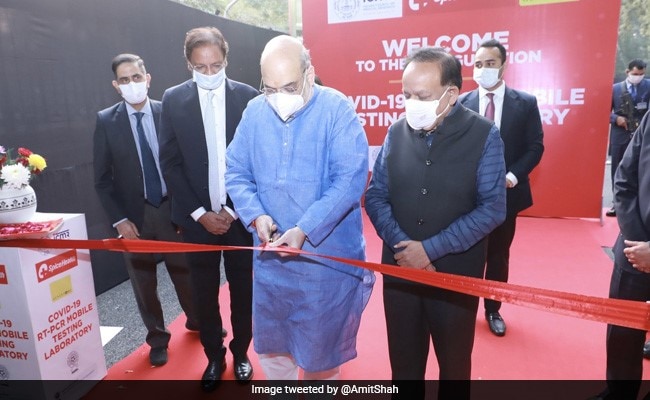 The laboratory was inaugurated by the home minister.

Union Home Minister Amit Shah on Monday launched a mobile laboratory that will conduct free RT-PCR tests for COVID-19 in Delhi and the results will be available in six to eight hours.

The Real-Time Polymerase Chain Reaction (RT-PCR) testing mobile laboratory, a joint initiative of the SpiceHealth and the government, came up after Shah stepped in to fight the recent spurt in the number of COVID-19 cases in Delhi with a close coordination of various wings of the Centre and the Delhi government.

The laboratory was inaugurated by the home minister. The tests would be conducted free of cost for the people of Delhi and the reports will be available in six to eight hours, an official spokesperson said.

Dedicated to the people of Delhi, the COVID-19 Mobile RT-PCR Lab jointly developed by @ICMRDELHI and Spice Health. Modi government is committed to contain the spread of COVID-19 in Delhi. This lab will surely help in early detection and cure. pic.twitter.com/mMZtXZnrjH

The cost of the test is Rs 499 and it will be borne by the Indian Council of Medical Research (ICMR), the official said.

Earlier, a home ministry statement had said that the test at the mobile RT-PCR laboratory could be conducted at an affordable price of Rs 499.

The rate for an RT-PCR test, considered to be the most accurate COVID test worldwide, in other laboratories was fixed at Rs 2,400 by a government-appointed committee and the report is normally available in 24-48 hours.

The SpiceHealth, part of the aviation group SpiceJet, in a statement said the laboratory can process up to 3,000 test reports per day and it has signed a memorandum of understanding (MoU) with the Indian Council of Medical Research (ICMR).

The SpiceHealth said it will set up 20 laboratories in different parts of the country in the first phase and a significant proportion of the tests will be conducted in collaboration with agencies of the Centre and the state governments.

Delhi's health infrastructure has started improving after Shah chaired a high-level meeting on November 15 and gave 12 instructions, following a fresh spike in the number of COVID-19 cases in the national capital.

The spurt in the number of coronavirus cases in Delhi was witnessed since October 28, when the daily rise breached the 5,000-mark for the first time. It crossed the 8,000-mark on November 11.

The fresh cases came out of the 54,893 tests conducted on Saturday, including 23,433 RT-PCR tests, according to a bulletin issued by the Delhi health department.

On November 20, the Union home ministry had said the capacity of daily RT-PCR tests in Delhi was increased to 37,200.

A total of 30,735 RT-PCR tests were conducted in Delhi on November 19 and the number of such tests carried out on November 15 was just 12,055, the home ministry had said.

As part of the efforts to ramp up Delhi's medical infrastructure, a total of 205 ICU beds and 116 oxygenated beds were added in various city hospitals on Friday.

The Delhi government has also launched a door-to-door survey for possible coronavirus patients and till Friday, 3,70,729 people were surveyed.

"For the first time, the number of RT-PCR tests in Delhi has exceeded that of the rapid antigen tests," a home ministry spokesperson said on Sunday.