The foot-overbridge (FOB) will be a crucial connecting link for passengers using the Pink Line and the Airport Express Line. 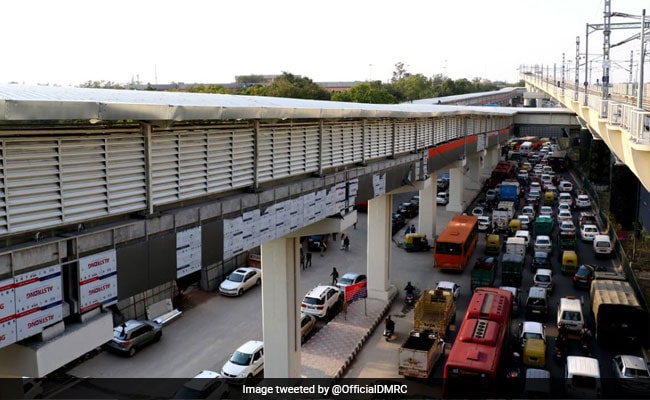 The Foot over bridge has been semi covered with a curved roof with glass railings.

A foot-overbridge connecting Delhi Metro's Dhaula Kuan and South Campus stations and having record 22 travelators is now open to the public on Saturday, officials said.

The foot-overbridge (FOB) will be a crucial connecting link for passengers using the Pink Line and the Airport Express Line. Many commuters travelling to and from the Terminal 3 of the Delhi international airport will be able to take this facility and interchange trains.

"The FOB connecting the Durgabai Deshmukh South Campus Metro station of Pink Line and Dhaula Kuan Metro station of the Airport Express Line was opened today for passengers after an inspection by Delhi Metro''s Managing Director Mangu Singh in the presence of other senior officials," Executive Director (Corporate Communications) of the DMRC Anuj Dayal said.

The FOB will connect the platforms of the Durgabai Deshmukh South Campus Metro station of Pink Line with the concourse level of Dhaula Kuan Airport Line station.

"The FOB is a major technological masterpiece as a record 22 travelators have been installed on it for the convenience of the passengers," he said.

Due to complex geographical challenges, a station could not have been constructed closer to Dhaula Kuan. Hence by providing a link between Durgabai Deshmukh South Campus and Dhaula Kuan stations, a smooth transition has been provided between Pink and the Airport Express Lines. pic.twitter.com/DwgMDJLtMD

There would be very few FOBs in the country with so many state-of-the-art travelators. The 22 travelators have been installed with landing space of about 15m in between them. The width of the FOB is about 6.1m, the DMRC said in a statement.

The FOB has also been semi covered with a curved roof on top and aluminium louvre from the sides with glass railings. It is also equipped with all the safety and security features like CCTV cameras, lighting and PA system, the statement said.

The CCTV cameras installed at strategic locations shall be monitored round-the-clock to ensure security of passengers. There will also be space for display panels, the statement said.

Benches have also been provided at some locations where the passengers would be able to take rest.

The DMRC said that construction of the FOB was a "major engineering challenge" due to the presence of multiple 220KV and 33KV high-tension lines at almost all pier locations.

In addition, water pipelines of the Delhi Jal Board and high pressure lines of GAIL were also present along the alignment and required constant monitoring, it said.

The location of the FOB along the arterial Ring Road made the construction even more challenging.

"The Road along the FOB is used for movement to the airport and remains crowded throughout the day. DMRC's engineers had to carry out bulk of the construction in the night time so that the flow of traffic was not hampered. The adjacent Ring Road was not blocked even for a few hours during the construction work," Mr Dayal said.

The Delhi Metro provides interchange facilities between two or more corridors at 25 different locations across the network, thus creating a web of metro corridors cris-crossing each other, he said.

Passengers from all parts of the city such as Mayur Vihar in the east, Ashram, Lajpat Nagar, South Extension, Moti Bagh in the south and Delhi Cantonment, Naraina in the west will be able to use the FOB via the Durgabai Deshmukh South Campus station to take the Airport Express Line to reach the airport.

Till now, the Airport Line was only connected with Blue Line at Dwarka Sector 21.