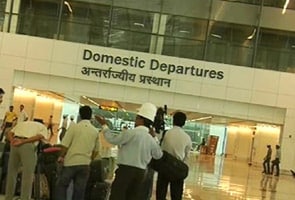 New Delhi: Flying out of Delhi? You may soon be asked to take off your shoes and belts, and jewellery if you are wearing, at the security check counters of the IGI Airport.

The Bureau of Civil Aviation Security (BCAS) is in the process of putting in place tighter security check norms like this, in line with those in the US and Europe, following higher threat perception, official sources said.

However, it may take a few more weeks as the required technology, like sophisticated door-frame metal detectors, is still not in place at all counters of the airport, they said.

If shoes, clothing items or other accessories containing metal set off an alarm, the security screener would insist on further checks, including pat-down frisking.

The sources, however, discounted the possibility of further delays the tighter security screening would cause by adding to the time by which a passenger can get into the aircraft.

They said the metal detectors would allow passengers not having any metal on their person to pass through without a pat-down.

Currently, its takes around two to three minutes for the Central Industrial Security Forces (CISF) personnel to clear a person during the security check but with implementation of the new proposal, this is likely to increase to 5-7 minutes, an airline official said.

BCAS had recently carried out a trial run of the system at Terminal 1D to access the problems that may crop up when the system is put in place, but the official sources said the response was not good as proper infrastructure was lacking.

In the US and Europe, passengers are required to take off their shoes, belts, all metallic objects, mobile phones and other electronic items in a separate tray before passing through the metal detectors.

Promoted
Listen to the latest songs, only on JioSaavn.com
Similarly, the passengers in New Delhi would soon have to put all their belongings and cabin baggage in a tray along with the footwear when they pass through the metal detector.