Besides Ankit's friends who helped Mr Saxena make all arrangements, Dr Kafeel Khan was among the attendees on Sunday

Yashpal Saxena organised an iftaar gathering for 200 people to send out a message of love and peace.

New Delhi: Four months after 23-year-old Ankit Saxena was stabbed to death by the family of his Muslim girlfriend in west Delhi's Raghubir Nagar, his father Yashpal Saxena organised an iftaar gathering for 200 people to send out a message of love and peace. Back then, when attempts were made to communalise the young man's death, Mr Saxena's appeal to all was not to make any "inflammatory statements".

"Yes, those who killed my son were Muslim...but every Muslim can't be branded for this. Don't use me to spread communal tension, don't drag me into it...I appeal to everyone not to link this to religion and vitiate the atmosphere," Mr Saxena had said.

The photographer was attacked near his home and stabbed by his girlfriend's parents, uncle and 14-year-old brother as they were against the relationship. Four people  - including her father and mother - were arrested. A charge-sheet has been filed and the hearing will take place in July.

Besides Ankit's friends, who helped Mr Saxena with the arrangements, the guests included Kafeel Khan, the doctor who was accused by the Uttar Pradesh government of a role in the death of infants at a state-run hospital in Gorakhpur last year and who recently walked out of jail. Dr Khan was seen greeting the family and applauding Mr Saxena's efforts to promote peace. 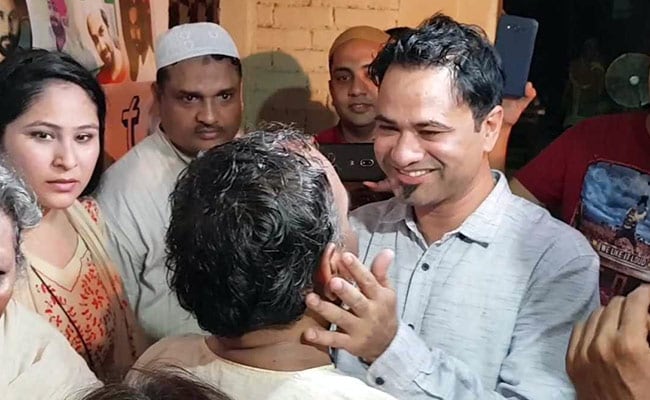 Around 7 pm, several authors, activists and neighbours gathered in the lane next to the Mr Saxena's house. Fruits, biryani and soft drinks were served.

"I feel overwhelmed. I am grateful to all those who attended the event. A lot of people discouraged me, but I wanted to send out a message of solidarity and peace through this iftaar gathering. I lost my only son and this is for him," Mr Saxena told NDTV.

Nasir Ahmed, who was at the event without an invitation, said, "I read about the iftaar on Facebook and decided to join in as it is a noble cause. There is no political motive behind it. This is all for humanity and I am happy to be part of it."

Promoted
Listen to the latest songs, only on JioSaavn.com
Social activist Anjali Bharadwaj said, "We are here to support and encourage the family in their message of solidarity and harmony. They have transcended the boundaries of hatred."

The Saxenas and Ankit's friends have also started a trust to help inter-faith couples marry.