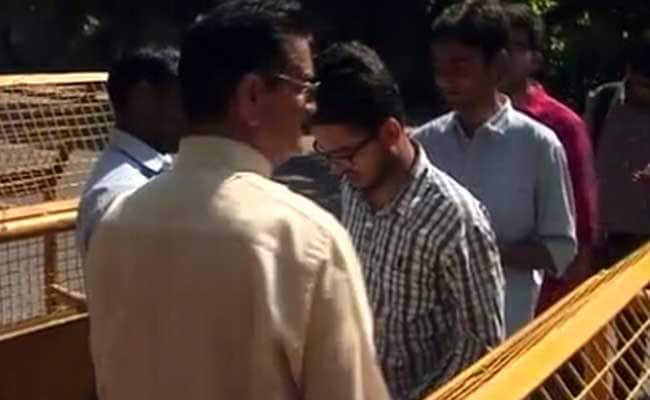 Despite the strict provisions of the Model Code of Conduct, North and South Campus of Delhi University were littered with pamphlets.

New Delhi: Excited students lined up in queues, many with their selfie sticks, while policemen dotted the roads of the campuses carpeted with pamphlets during polling today for Delhi University Students' Union (DUSU) elections across 42 colleges.

Rollback of Choice Based Credit System (CBCS) and security for women seems to have been top priority for voters.

Sajal, a first year student of Hindu College said, "I believe that CBCS should be rolled back and hence I have voted for the party which will carry forward the issue. DUSU had played a considerable role in rollback of the Four Year Undergraduate Programme (FYUP) as well".

"I have voted over the issue of women security and infrastructure development of the campus. The sky rocketing cut-offs kept so many students away from DU this year and no new colleges have been opened to accommodate more students," said Mamata Singh, a first year student of Law Faculty.

Despite the model code of conduct for DUSU elections, roads across the North and South campus were littered with pamphlets. A total of 80 First Information Reports were registered against those indulging in defacement of walls.

DUSU is the representative body of the students from most colleges and faculties. The elections have been keenly contested over the years, and are considered to be a stepping stone to mainstream politics.

The counting of votes will be taken up tomorrow after which the results will be declared.