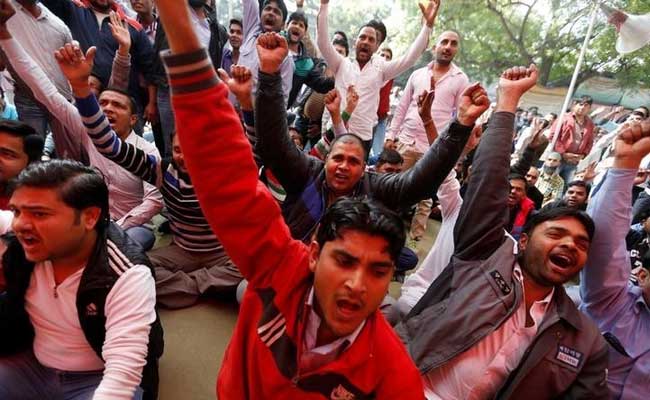 Taxi unions went on strike on February 10 to protest against 'low fares' offered by Ola, Uber.

New Delhi: The Delhi High Court today restrained two taxi drivers' unions from disrupting services of cabs run by Ola and Uber in the national capital region. Justice Rajiv Sahai Endlaw passed a decree "permanently injuncting" the two unions and anyone associated with them from blocking cabs of Ola and Uber.

The court also stopped the unions and their members or associates from removing or confiscating the mobile devices installed in the app-based cabs.

It also restrained them from staging any demonstration or causing any commotion or violence within 500 metres of the offices of Ola and Uber in the national capital.

The court passed the order after the two app-based cab companies said that efforts to settle the dispute with the two unions - the Sarvodaya Driver Association of Delhi (SDAD) and the Rajdhani Tourist Drivers' Union - by mediation have failed.

Uber, represented by senior advocate Rajiv Nayar, also claimed that a pamphlet was being circulated by the taxi unions calling for a strike tomorrow. The lawyer appearing for SDAD contended that the pamphlet was not being circulated by its members or associates as there are several other taxi unions operating in the national capital. The court, earlier, had sent the companies and the unions to mediation to resolve the matter.

Promoted
Listen to the latest songs, only on JioSaavn.com
The court had also asked Delhi Police to ensure safety of the drivers working for the two companies. It had also said that their vehicles should not be stopped or blocked from plying and should not be damaged.

The pleas were moved after hundreds of drivers of Uber and Ola went on an indefinite strike from February 10 in Delhi-NCR to protest against "low fares" and "lack" of basic amenities from the app-based cab companies.
Comments
Delhi High CourtOlaUberTaxi Strike In Delhi