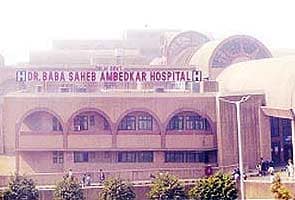 New Delhi: The NHRC has issued notices to the Chief Secretary and the Health Secretary of Delhi Government. In a shocking incident on Monday, while a woman delivered a baby outside a hospital as authorities denied her admission, another died for want of timely medication. Both incidents took place at the Baba Bhimrao Ambedkar hospital in Rohini area of the North-West Delhi.

Barely a couple of hours before the incident, Delhi Chief Minister Sheila Dikshit announced at a function that the government will provide free ambulance service to all pregnant women to minimise maternal and child death rate in the city.

On Monday morning, Suman (23), a resident of Shahbad Dairy area of Outer Delhi, gave birth to a baby boy just outside the emergency gate of Babasaheb Ambedkar Hospital. Both the baby and the mother were admitted to the hospital later under critical condition.

"No one was there to help my wife. I begged the hospital staff to help her, but none turned up. This was complete negligence on the part of the hospital authorities," said Ashok, her husband. Ashok claimed a doctor asked him to go to some other hospital as there was no space. He then asked for an ambulance to take his wife but the request was denied.

An eye witness, Monika, said, "There was no one in front of emergency gate. They left the patient without even thinking twice about her and the baby. When the child was born, they then took the child. Doctors are so heartless."

Ashok added, "After the birth, I started shouting in the reception area. People gathered and pressurised the authorities to admit my boy and wife. Now they both are in critical condition. At 4 in the evening, the doctors told me if I was not able to arrange blood soon, they will not be responsible for the consequences."

Promoted
Listen to the latest songs, only on JioSaavn.com
In another case at the same hospital, a woman identified as Deepa, a resident Jehangirpuri area of North West Delhi, breathed her last. Her husband, Kundan claimed that he bought the medicines from outside but the hospital authorities didn't bother to administer them.

Deepa's father-in-law Ram Dulare said, "We bought the medicine from outside the hospital and got her tests done at a diagnostic centre. Still they did not pay any attention to the patient". The hospital authorities declined to comment on the matter. Deputy MS Dr Jagat said he wasn't even aware of the incident.

Aftab Poonawala Would Have Killed Girlfriend 10 Days Before, But For...