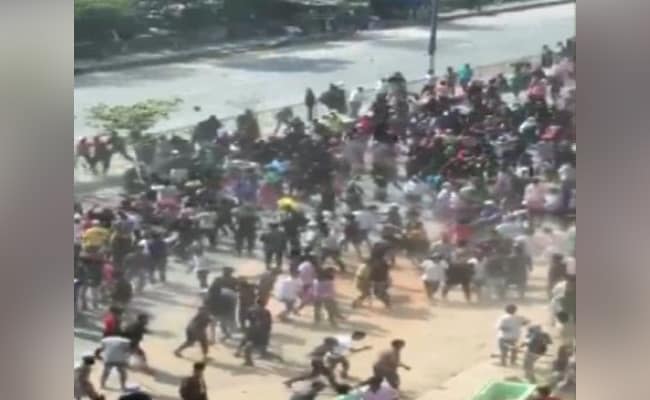 The police had challenged the order before the Delhi High Court, which is pending. (File)

JNU student Natasha Narwal, arrested under the stringent Unlawful Activities (Prevention) Act, alleged before a court on Thursday that the charge sheet filed by the police in a north east Delhi riots case revolved around the deaths of only three persons, including Head constable Ratan Lal and and Intelligence Bureau official Ankit Sharma, and ignored the deaths of the other local persons.

Her counsel Adit Pujari alleged before Additional Sessions Judge Amitabh Rawat that 53 people died in the riots but the charge sheet revolved around the deaths of only three persons.

"Are we living in a society where the life of a policemen is, they are doing hard work no doubt, more important than 48 other civilians. The prosecution named 53 persons who died in the riots, yet their conspiracy chargesheet revolves around three people, Ratan Lal, Rahul Solanki and Ankit Sharma."

"What about the other 48 people who are locals and who died? Everything comes back to these three people. The lady who was 84 years old and who died in her house when her house was burned by the mob of other community is not important," he claimed during the hearing of Narwal's bail application through video conferencing.

Pujari said that the conspiracy was not to cause riots, but to create disaffection against India allegedly by protestors supporting the Citizenship Amendment Act.

"It was to create some kind of situation which would attract sections of UAPA. UAPA is not attracted against Narwal. She was not present at the alleged secret conspiratorial meeting at Chand Bag and her call detail record showed it," he claimed.

He further said if the prosecution's case was that they were not bound to provide every material with the chargesheet, then the accused has every right to say the prosecution is "mala fide".

"The police followed the 300 women that day who came from Jahangirpuri to Jafrabad. They could not have carried the acid bottles, chilli powder etc as alleged by the police. If so the police could have arrested them then and there," he claimed.

He further said right before the elections in Delhi in February, there was an alleged vicious campaign to create communal divide and the Election Commission had given continuous notices to members of a certain political party to stop doing it.

"Those very same notices were to the members who were not only aligning to a particular community and supporting CAA," he stated.

He further said that selective reading of chats of the WhatsApp group Delhi Protest Support Group (DPSG) by the prosecution was "unfair".

"This is an incomplete and deliberately false investigation. No prima facie case is made out against Narwal. Every case of conspiracy has accused who want to do multiple things but towards the same end. Narwal held a secular protest. Unless the prosecution alleges that she converted her religion, it does not make any sense that she were sitting among Muslim women, being Hindu herself, and instigated them against her own community. The alleged conspiracies do not make sense.

Countering the submissions, Special Public Prosecutior Amit Prasad said the intent throughout was a disruptive "Chakka Jaam", with clear indication that the end result was violence.

"Narwal was brought on to the DPSG group after she was able to set up the protest site at Seelampur. She was part of the DPSG group which was controlling and monitoring all protest sites. She attended the alleged conspiratorial meeting of February 16 and February 17. The chats have clearly revealed that there was a proposal to incite violence. She was privy to the principal conspirators," the public prosecutor alleged.

Ms Narwal's counsel also commented on the bulkiness of the over 17,000-page charge sheet after his system crashed in the middle of the hearing and said it was "so heavy" that it often slowed down the computer.

During the hearing, the system of prosector Amit Prasad also crashed and it took him couple of minutes to restart it and join the proceedings.

Pujari said, "This is the problem with not having a physical copy of the chargesheet with us. The chargesheet is so heavy that it often slows down the computer."

The counsels for the accused have not been supplied a physical copy of the chargesheet. The court had earlier said that besides the soft copy, every accused should also be given a hard copy.

The police had challenged the order before the Delhi High Court, which is pending.

Pinjra Tod (Break the Cage) was founded in 2015 with an aim to make hostels and paying guest accommodations less restrictive for women students.