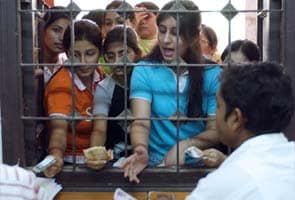 New Delhi: The Delhi University today declared its ninth cut-off list to the four-year undergraduate programme after completion of the orientation process.

The list is mainly for students belonging to reserved categories. There are, however, a few courses still open for general students.

However, seats for science courses are closed for general candidates who can only now try in arts and commerce.

There are seven colleges with commerce seats and six with economics seats.

It is mainly evening colleges like Shyam Lal, Sri Aurobindo College and Satyawati College that are waiting for general students to fill up seats.

While three colleges have vacancies for Hindi and Sanskrit, two have seats for history.

Indraprastha College for Women has again opened admission to commerce, English and Hindi after having declared closed in the eight cut-off list.

"There has been migration of commerce students to B-schools ever since the Master of Business Administration and Chartered Accountancy results have been declared," Indraprastha College for Women principal Babli Moitra Saraf told IANS.

Moti Lal Nehru College (evening) is the only college that has seats vacant for almost all the courses it offers.

The Bhaskaracharya College of Applied Sciences and Ram Lal Anand College that had made news during the first cut-off, are still waiting for students to fill B.Tech (computer science) seats. The cut-off has been moderately brought down to 93 per cent.

Promoted
Listen to the latest songs, only on JioSaavn.com
In the first cut-off list, Ram Lal Anand College had put the ceiling at 100 per cent for admission to its B.Tech (computer science) course while Bhaskaracharya College of Applied Sciences have kept it in the bracket of 97-99.75 per cent for commerce and B.Tech courses.
DU Registrar Alka Sharma said: "Students have to complete their admission process by July 29 after which any admission undertaken by colleges would not be accepted."

The university introduced the four-year undergraduate programme from this academic session. Under it, students will be required to study 11 foundation courses in the first two years with the main subjects under disciplines I and II and applied courses.