During the G-20 Presidency, India will hold about 200 meetings in 32 different sectors in multiple locations across India. 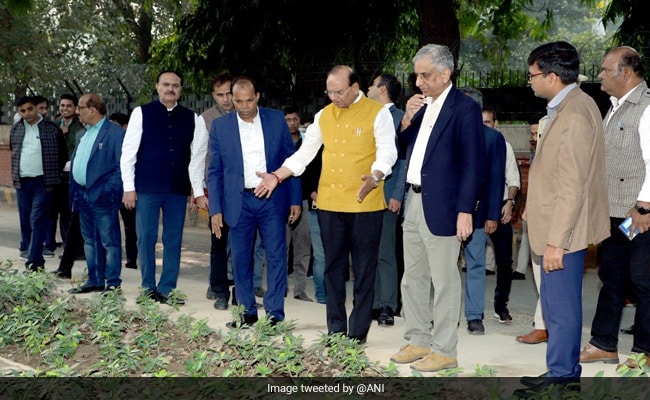 NDMC officials also informed that the footpaths are also being decorated.

New Delhi Municipal Corporation (NDMC) on Saturday, informed that the roads, kerbs, footpaths and central verges in the national capital are undergoing a makeover in the run-up to the G-20 summit.

NDMC officials informed that the makeover is being done under the direct supervision of Delhi Lieutenant Governor (LG) VK Saxena.

"Roads, kerbs, footpaths and central verges in Delhi are undergoing a thorough makeover by cleaning, refurbishing and beautification under the direct supervision of LG VK Saxena, as the Capital gets ready to host various events in the run-up to the G-20 summit," the officials said.

NDMC officials also informed that the footpaths are also being decorated with kerb stones and flower pots.

"Apart from cleaning, repair and replacement of footpaths along with a fresh painting of kerb stones is also underway. Thousands of flower pots with seasonal plants and flowers are being put along the footpaths and earthen side verges of roads," the officials said.

India will host the G20 summit in September 2023. During the G-20 Presidency, India will hold about 200 meetings in 32 different sectors in multiple locations across India.

The G-20 Summit to be held next year would be one of the highest-profile international gatherings to be hosted by India, according to the Prime Minister's Office (PMO).

The agenda will likely be cooperation for sustainable and equitable development for shared global peace and prosperity and capacity building to face emerging global challenges.

As India formally assumes the Presidency of the Group of Twenty (G20), the issues of food and energy securities will be among the major objectives for Prime Minister Narendra Modi.