The 300 electric buses, after approval by the cabinet, will start arriving from October and the entire induction will be completed by next February, said Transport Minister Kailash Gahlot 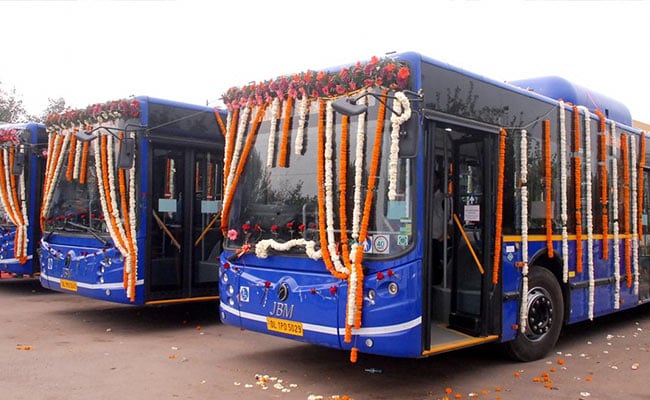 DTC had floated an open tender for procurement of 300 electric air-conditioned buses in December. (File)

The Delhi Transport Corporation on Monday approved bids for procurement of 300 air-conditioned low-floor e-buses, a move hailed by Chief Minister Arvind Kejriwal who said his government was committed to switching public transport to electric mode.

The 300 electric buses, after approval by the cabinet, will start arriving from October and the entire induction will be completed by next February, said Transport Minister Kailash Gahlot who chaired the board meeting.

"Along with private vehicles, we are also committed to switch public transport to electric," Mr Kejriwal tweeted.

"Delhi will defeat pollution with the joint efforts of the people & the government. Our EV Policy will set a precedent for the world."

The 300 low-floor air-conditioned buses would be equipped with state-of-the-art features like real-time passenger information system, CCTVs, panic buttons, GPS and other facilities, and will be friendly for persons with disabilities.

In view of passenger safety, especially for women passengers, these buses would be integrated with the newly-built Command and Control Centre of the Transport Department, according to a statement.

Earlier, the DTC had floated an open tender for the procurement of 300 electric air-conditioned buses in December 2020.

It has already issued letter of award in respect of 1,000 low-floor CNG buses, which are BS-VI compliant. The vehicles will start arriving from May and the entire fleet is likely to be inducted by September.

The DTC will achieve a total fleet strength of 5,060 with the new inductions, it added.

This year will see a thousand new buses being added in the DTC and close to 600 new electric buses also inducted under the cluster scheme too, he added.

"Other Parties Curse Me, But I Have People's Support": Arvind Kejriwal