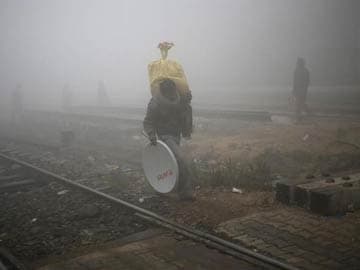 New Delhi: Delhi residents woke on Wednesday to a third day of thick grey smog in one of the worst episodes this year, which disrupted dozens of flights and train services and caused a rash of health complaints.

New Delhi is among several Asian cities, including Beijing, that are suffering from toxic levels of pollution fuelled by industrial growth and a surge in the numbers of vehicles crowding their roads.

The cloak of fog draping much of north India forced dozens of flights to be diverted or cancelled, disrupted train schedules and led to a doubling in the number of medical emergencies caused by breathing difficulty, officials said.

Runway visibility has been dropping to as low as 50 metres (164 feet) in Delhi over the past few days.

"Both departures and arrivals were stalled," said airport spokesman Kapil Sabarwal, as planes hovered in holding patterns, waiting for conditions to clear.

Two passenger trains were cancelled on Wednesday, while 60 trains were running late and 25 had been rescheduled on the third straight day of disruptions, said railways spokesman Neeraj Sharma.

The fine particles suspended in the fog ranged as much as seven times beyond the concentration that India considers safe, to reach a level the United States Environmental Protection Agency calls "hazardous".

At that point, the agency urges that all outdoor physical activity be avoided and that victims of heart or respiratory ailments stay indoors, along with children and the elderly.

The fog mingled with high pollution was an extreme event "when the air quality goes from very poor to dangerous," said Gufran Beig, a scientist at the Indian Institute of Tropical Meteorology.

Calm wind conditions and a smaller gap between extreme temperatures helped trap pollutants in the air, Beig said. The frequency and duration of such events have been rising every year since government records started in 2010, he added.

The only time this year that Delhi has choked in such severe air pollution was during traditional fireworks celebrations of Diwali, the Hindu festival of lights, in November, which coincided with a foggy cold snap.

Promoted
Listen to the latest songs, only on JioSaavn.com
The number of patients seeking treatment for respiratory and cardiac diseases has risen by about a quarter since the fog descended on Monday, said Dr. Randeep Guleria, head of the pulmonary department at the All-India Institute of Medical Sciences, a leading hospital in the city.