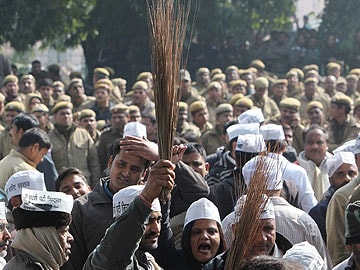 Arvind Kejriwal and his ministers got into a direct confrontation with Delhi Police by beginning a dharna outside Rail Bhavan.

New Delhi: Delhi Chief Minister Arvind Kejriwal has been fiercely criticised by both external ally Congress and the BJP for Monday's unprecedented protest in the heart of the capital.

"The situation we have seen today on the streets of Delhi is anarchic," said the BJP's Nirmala Sitharaman, accusing allies Aam Aadmi Party and Congress of engaging in a "mock fight" that affected the 'aam admi' or common man.

The Congress' Arvinder Singh Lovely said Mr Kejriwal had taken "the law in his hands" without "even a valid reason for a dharna" and accused the Chief Minister of abandoning his work to defend his ministers and demand the suspension of three cops.

"People who wanted to hold up the constitution are now going against it... We have time and again tried to explain that there is a lot of difference between running a government and being an activist," Mr Lovely said.

Mr Kejriwal and his ministers have got into a direct confrontation with the Delhi Police, by beginning a dharna outside Rail Bhavan demanding action against police officials who refused to carry out a raid on an alleged drug and prostitution racket in South Delhi last week.

The Congress' Sanjay Nirupam has offered some political advise. He suggests Mr Kejriwal should stop indulging in "drama" and concentrate on governance. As a chief minister, Mr Nirupam said, Mr Kejriwal could resolve issues by negotiating with the Centre.