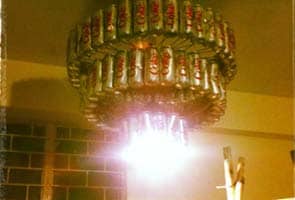 New Delhi: In a unique initiative on World Environment Day on Wednesday, a Delhi-based NGO has inaugurated its office created from waste sourced from scrap dealers and junk yards across the city.

Swechha - a voluntary organisation working in the areas of environment and social development - opened its new office made of waste in Khirkee Extension in South Delhi.

Everything in the new office, ranging from storage space and partitions to lamp shades, is made out of trash.

"We scanned junk markets across the city. Most of the trash was sourced from local junk dealers and the design was based on what we got from them," Vimlendu Jha, founder of Swechha, told IANS.

Jha, who designed the office, said the space is a manifestation of the organisation's commitment to providing green solutions to the problem of urban waste.

"It usually would have cost not less than Rs.15 lakh. It is a way to communicate that trash can be useful too," he said.

He said that initially construction workers and carpenters were surprised when they came to know that they have to design a building using trash.

"But once we started working, it took us just 12 days to finish. We have done some touch-ups like painting certain objects with bright colours to make them look striking. We have not melted or changed anything to use it," he said.

Promoted
Listen to the latest songs, only on JioSaavn.com
Sweccha is ready to help people and organisations interested in building such places at economical cost, he added.