During the weekend curfew period, Delhi Metro services will be available at frequency of 15 minutes on Yellow Line and Blue Line, and 20 minutes on all other lines. 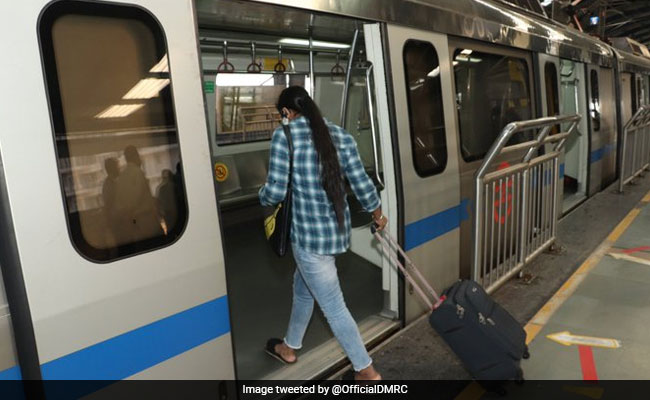 Delhi Metro services during curfew on weekends --January 8 and 9. (File)

Trains on various corridors of Delhi Metro network will be available at varying frequencies during the weekend curfew, officials said on Wednesday.

Delhi Health Minister Satyendar Jain on Tuesday had said that a weekend curfew was being imposed in view of rising Covid cases.

The DMRC, in a statement on Wednesday said, as per the latest guidelines issued by the DDMA, a curfew has been imposed for the coming weekend -- January 8 and 9 -- for the containment of COVID-19.

During this period, metro services will be available at a frequency of 15 minutes on the Yellow Line (i.e. HUDA City Centre to Samaypur Badli) and Blue Line (i.e. Dwarka Sec-21 to NOIDA Electronic City/Vaishali), it said.

On all other lines, trains will be available at a frequency of 20 minutes during the weekend curfew, the DMRC said.

For the rest of the weekdays i.e. from Monday to Friday, metro services will continue to remain available as usual as per the extant guidelines, officials said.

Delhi is currently reporting a fresh surge in coronavirus cases. On Wednesday, 10,665 cases with a positivity rate of 11.88 per cent, and eight deaths were recorded.

The DMRC said according to the latest guidelines, though 100 per cent sitting is allowed in metro trains, no standing is allowed. Therefore, entry to the trains and stations shall continue to remain highly restrictive as only a limited number of passengers (50 only) per coach are allowed, it added.

It is advisable that travel only if absolutely essential, also keep extra time during commuting by metro as entry shall still continue to be regulated to ensure compliance with the guidelines which may result in queues or waiting of passengers outside stations, officials said.

In a major relief for commuters, authorities had announced on Tuesday that city buses and metro trains will return to running to their full seating capacity throughout the week in the wake of long queues witnessed at various bus stands stations of the mass rapid transit system.