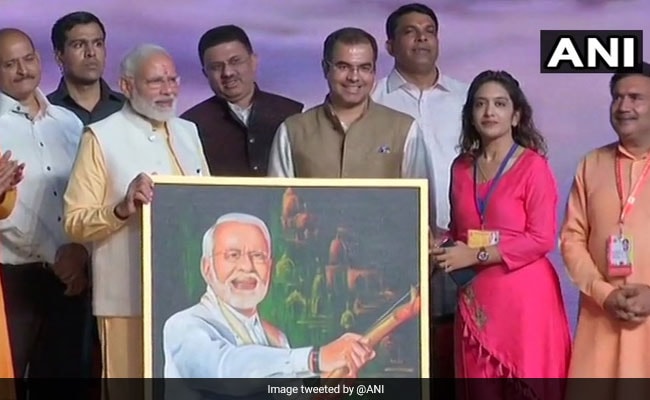 The girl said she was overjoyed after receiving praises for it from the PM Modi.

Renuka's joy knew no bounds after she got an opportunity to present her self-made painting to the Prime Minister Narendra Modi at Rameela ground Dwarka on ''Vijay Dashmi''.

She said that it took her two days to complete her artwork and she was overjoyed after receiving praises for it from the Prime Minister.

"He could have simply received the present, but when he came to know that a daughter had painted it, he called me on the stage and appreciated me," said Renuka.

"I got the call from BJP leader Parvesh Sahib Singh, a day before yesterday, asking me whether I can make something that can be presented to the Prime Minister on this occasion. It took me almost two days to make it. I never thought I would be given an opportunity to present it personally to Modi Ji," she added.

"I was overwhelmed after receiving his blessings", she said.

Upon his arrival at the festival venue, the Prime Minister was received by Delhi BJP Chief Manoj Tiwari and West Delhi MP Parvesh Sahib Singh.

The day is celebrated with enthusiasm and vigour throughout the country in different ways but burning effigies of Ravana, Kumbhkaran and Meghnad along with fireworks remains the most prominent form of celebration in the northern part of the country.

In South India, Mysore's Dussehra is known for its grandeur, where thousands throng the city palace to witness the procession and take part in festivities.