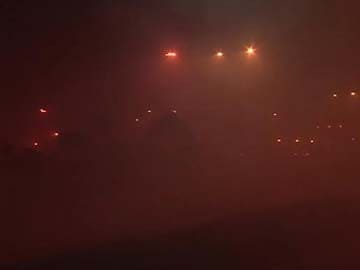 New Delhi: Delhi is experiencing the worst fog since 2010, severely disrupting air, road and rail traffic in the national capital.

With visibility improving, flights have now started to take off.

However, last night, as flights were grounded, there were reports of chaos at Terminal 3 of the airport with passengers reportedly complaining that they were not being allowed to exit the airport because of security reasons.

With maximum visibility staying at less than 600 metres through Sunday, around 206 flights got delayed and with no relief expected till around 9:30 am, those planning to travel may have to face difficulties.

Dense fog also slowed the Sunday evening traffic on the roads with visibility in some areas reported at less than 10 metres.

The blanket of thick fog over the national capital also hit train services; 28 trains have been delayed since last night.

Delhi woke up to a foggy morning on Sunday as the minimum temperature settled down at 7.8 degree Celsius, one notch below normal. Met officials said due to low temperature, absence of heavy wind and moisture incursion from Madhya Pradesh, weather conditions were favourable for intensification of fog in Delhi and adjoining parts of the northwest plains.

Promoted
Listen to the latest songs, only on JioSaavn.com
Apart from the national capital, thick fog has also been reported from various cities in Haryana, Uttar Pradesh and Madhya Pradesh. Cold wave conditions continue across most parts of north India with temperatures at most places remaining below normal.