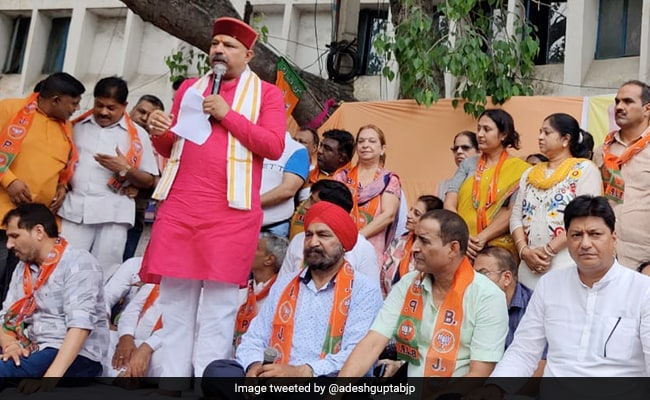 Delhi BJP president Adesh Gupta said the protests are being staged in all 70 constituencies.

Leaders and workers of the BJP's Delhi unit today staged protests across the city, including in front of the Aam Aadmi Party office, over the rise in power charges and alleged the AAP government was "neglecting" people's problems.

Delhi BJP president Adesh Gupta said the protests are being staged in all the 70 Assembly constituencies in the national capital.

A group of Delhi BJP leaders led by former mayor Ravinder Gupta also staged a protest outside AAP office and demanded that the Kejriwal government should withdraw increase in electricity charges. They also burnt an effigy of the chief minister during the protest.

Adesh Gupta claimed that an appointment was sought from Chief Minister Arvind Kejriwal to discuss various issues, including the rise in power purchase adjustment cost.

But instead of paying attention to the local issues, he is busy planning his Singapore trip, Mr Gupta alleged.

The BJP has always been raising people's issues and holding massive protests against Kejriwal in a democratic way in all the Assembly segments, he said.

People in Delhi are already paying higher power tariffs and with this hike in power purchase adjustment cost, their problems will multiply. This hike must be rolled back, the Delhi BJP president demanded.

After the approval by the Delhi Electricity Regulatory Commission (DERC), discoms in the city raised power purchase adjustment cost (PPAC) by 2-6 per cent, a hike which will reflect in the power bills of consumers.

Former mayor Ravinder Gupta said, "The BJP workers from Matia Mahal area staged a protest outside AAP office here. The Kejriwal government is looting the people of Delhi by secretely increasing charges although he is claiming free electricity supply in the city," Mr Gupta charged.