Over 1.4 crore people, who are eligible to vote in the Delhi Assembly election, will choose 70 MLAs today. 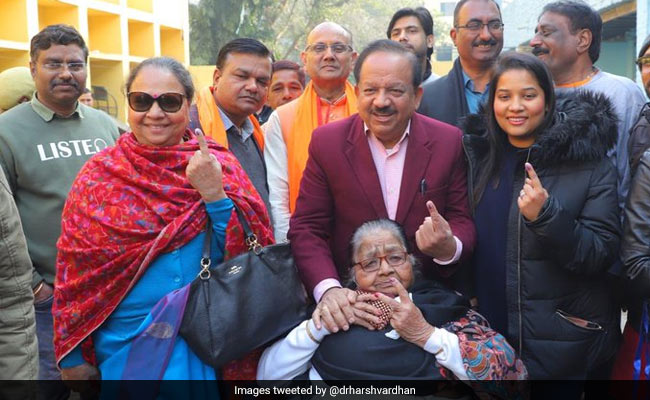 Harsh Vardhan along with his family members, including wife and mother, voted in Krishna Nagar.

Union Health Minister Dr. Harsh Vardhan voted within an hour after polling began for the assembly elections in Delhi. Dr Vardhan along with his family members, including wife and mother, voted at Ratan Devi Public School in Krishna Nagar at around 8:45 to cast their votes.

The Union Minister was seen helping his mother get inside the polling station and poll her vote, on a wheelchair.

"I am confident that BJP''s government will be formed in Delhi on February 11. Our candidates will win with an overwhelming majority and it would be a quality victory for BJP," said Dr. Vardhan while speaking to the reporters.

On being asked if Shaheen Bagh is an issue in the Assembly elections, Mr Vardhan said, "The only issue of these elections is PM Modi's extraordinary personality, his work done for Delhi and politics based on truth and on the other hand there are lies and five years of failure in Delhi."

Over 1.4 crore people, who are eligible to vote in the Delhi Assembly election, will choose 70 MLAs today.

As many as 190 companies of the Central Armed Police Forces (CAPF) have been deployed for the smooth conduct of the Delhi Assembly election today. Besides this, 19,000 Home Guards and 42,000 Delhi Police personnel are deployed at polling booths across the national capital. (ANI)

The city is witnessing a triangular contest among the ruling AAP, which won a landslide majority in the last elections, the BJP and the Congress. In the last poll, the AAP had won 67 seats, the BJP 3. The Congress didn't open its account.

To see the full list of candidates from all parties contesting the 2020 Delhi Assembly election, please click here. Whether or not you are from Delhi, you can leave you comment and see what others have to say in this interactive map.