The high court asked an expert committee, set by the Lieutenant Governor (LG), to convene a meeting on priority basis to consider the extent to which capacity of testing by RT/PCR should be ramped up. 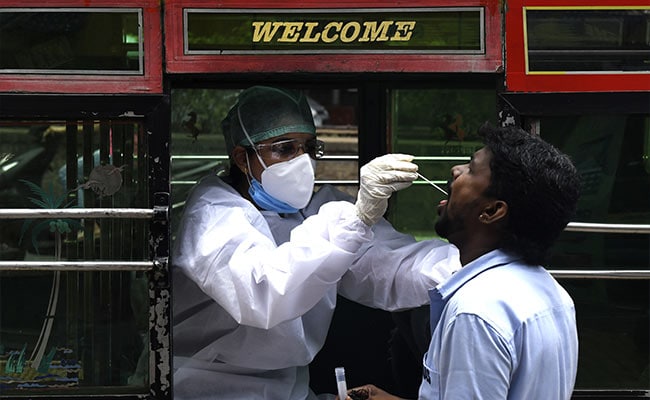 At present, the sanctioned strength of conducting RT/PCR is 14,000 per day in Delhi.

The Delhi High Court Wednesday suggested that the AAP government increase the RT/PCR test capacity to the maximum possible to detect COVID-19 infection, as Rapid Antigen Tests (RATs) were only 60 per cent accurate.

The high court asked an expert committee, set by the Lieutenant Governor (LG), to convene a meeting on priority basis to consider the extent to which capacity of testing by RT/PCR should be ramped up.

At present, the sanctioned strength of conducting RT/PCR is 14,000 per day in Delhi.

"Having regard to the fact that results of RAT are 60 per cent accurate, leaving grave doubt about infection in those who are asymptomatic, we are of the firm view that RT/PCR should be the way forward," said a bench of Justice Hima Kohli and Subramonium Prasad.

"In our opinion, Delhi government ought to focus on shoring up the capacity of testing through RT/PCR so that testing is increased through RT/PCR as much as possible," it said.

The court directed the Delhi government to file a status report along with a report of the committee in this regard and listed the matter for further hearing on September 30.

The bench also noted that in the week from September 8 to 15, the testing done through RT/PCR was less than one fourth of the total number of tests and rest was done by the RAT process.

It asked the Delhi government to place on record before the next date of hearing, the results of the third sero-survey conducted by it in September along with the comparison report with the previous two surveys.

The court was informed that out of 435 mohalla clinics in Delhi, 400 were functional and 50-60 of them were conducting COVID-19 testing after completing their OPDs.

The bench said it was of the view that not only mohalla clinics, but community centres shall also be roped in for setting up testing facilities as cases of COVID-19 are shooting up on a daily basis and on Tuesday 4,473 fresh cases have come up in Delhi, taking the tally to more than 2.25 lakh.

During the hearing, Delhi government counsel Satyakam assured the court that the authorities will consider increasing testing through RT/PCR but also defended its process of conducting more RAT saying it gives quick results.

The court said as RAT mostly gives false negative reports, why the government should wait for it and then go to the next level of RT/PCR. Instead, it should shore up to RT/PCR capacity.

Satyakam said the government has a guideline which provides for the way they have to proceed and assured the court that they are not falling short of RT/PCR capacity and have enough capacity.

The court suggested that the testing by RT/PCR should be at least 50 per cent of the total testing numbers.

The Delhi government counsel claimed that the testing done in the city was the best in the country and they were doing the maximum number of tests.

To this, the high court said, "Modesty is not your virtue. To say you are the best should come from the residents of the city and not from the state itself."

The bench observed, "This is for sure that there is no cure for this disease till the vaccine comes. We have to ensure that the person who has this infection does not spread it further."

In pursuance to the court's September 8 direction, the Delhi government has now issued a notification that doctor's prescription is not mandatory for those voluntarily going for RT/PCR test to detect COVID-19 infection in the national capital.

People need to carry Aadhaar card for Delhi address proof and fill a form as prescribed by Indian Council of Medical Research (ICMR) for COVID-19 testing, it said.

Before this, it was mandatory for a person to have a doctor's prescription or symptoms to get tested for the virus.

The court was hearing a PIL by advocate Rakesh Malhotra seeking increasing the COVID-19 testing numbers in the national capital and getting speedy results.